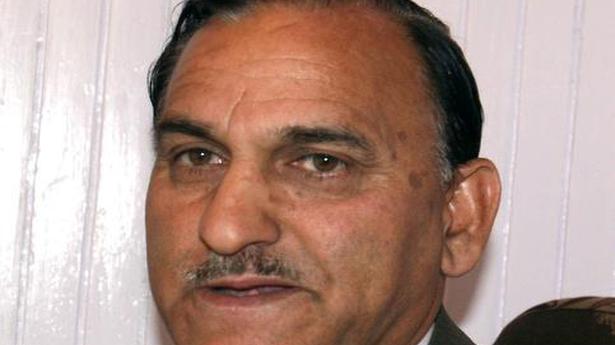 Senior Congress leader and former minister G.M. Saroori on Tuesday produced himself before the National Investigation Agency here for questioning in connection with a series of terrorist attacks in Kishtwar district.

Saroori, 67, who is Jammu and Kashmir Congress vice-president and three-time legislator from Inderwal constituency, was served a notice under Section 160 CrPC by the probe agency, asking him to appear before it to answer “certain questions” relating to a case registered by NIA in the district in 2018.

“I don’t know why I was summoned under section 160 CrPC… Do you think I have any connection with Hizbul Mujahideen or Osama (a slain terrorist),” Saroori told reporters outside the NIA office.

The communally sensitive Kishtwar had been rocked by a series of terror incidents since November 2018 after the hilly district was declared terrorism-free over a decade ago.

They also snatched the service rifle of the deputy commissioner’s PSO on March 8, 2019, and the rifle of the PSO of People’s Democratic Party district president on September 13 last year.

The NIA is investigating the terror cases.

The first major success against terrorists in the district was registered on September 28 last year when security forces killed three ultras, including the mastermind behind the killings Osama Bin Javed, in Ramban district.

In September last year, Saroori’s brother Mohammad Shafi was among a dozen persons booked in two separate FIRs for their alleged links with Hizbul Mujahideen but was not arrested.

Shafi refuted having any links with the group and said the allegations against him were “politically motivated”. He said he was open to a fair probe and hopeful that the truth would prevail.

Two unidentified persons on Sunday night gunned down a youth who was in judicial custody on the charge of rape and attempted murder of a girl. The slain youth was identified as Ghanashyam Heisnam, 25, of Thanga islet in Bishnupur district in Manipur. Police are not ruling out the involvement of proscribed insurgents in the […]