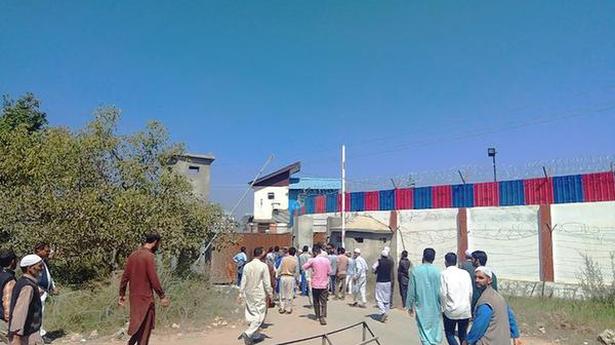 Gulzar Ahmad Wagey has not seen his 11-year-old son for 22 days. Mr. Wagey, a shopkeeper in Shopian’s Keegam village, said his son was picked up by security forces in the last week of August from their home. He said he had been coming to the police station every day to know the son’s whereabouts.

“I do not know why he was arrested. Saheb (Superintendent of Police) assured us that he will let me meet him,” said Mr. Wagey as he waited outside the Shopian headquarters. He later said the police had agreed to release his son.

Hundreds waited outside the police station in Shopian to get information about their relatives, friends and neighbours when The Hindu visited the place last week. Most were detained to prevent any kind of violence in the aftermath of August 5 when Home Minister Amit Shah moved two Bills to revoke the special status of J&K under Article 370 and bifurcate and downgrade the State into two Union Territories.

The J&K Director General of Police Dilbag Singh said in an interview to The Hindu that August 5 onwards, around 3,000 cases were reported where young men were picked up and released subsequently in the Kashmir Valley. Around 800 remain in detention and nearly 150 are lodged in jails outside J&K.

Bilal Ahmad, resident of Shopian said that his neighbour Abdul Rauf (50), a government employee was missing for the past 40 days.

“He was picked up from Zainapora. We come here everyday to get information about him but have not succeeded so far. They are sending young men to jails outside the State. In the absence of mobile phones there is no way we can get any information,” Mr. Ahmad said.

Shopian is one of the worst militancy-affected districts in South Kashmir. There are around 225 villages in the district spread over 60,000 hectares of which half is covered by apple orchards. It is the largest producer of apples in J&K.

According to police, last year 42 men from Shopian joined various terrorist groups, while this year only 17 took to militancy. A police officer said that post August 5, only one man joined the terror group.

In the past one year, as many as 20,000 people have signed community bonds to secure the release of 800 young men and boys who were involved in incidents of stone-pelting.

The J&K police have started a unique practice of engaging the community elders, religious teachers and family members to deter the youth from repeating offences like throwing stones at security forces. As per the bond, the community members are made to stand as guarantors for the youth at the local police station for first-time offenders. The bond has no legal sanctity though.

All markets remain shut in Shopian. Muzaffar Ahamd Ganai, a former sarpanch said that residents were not opening shops in protest. “Earlier separatists used to give call for a strike. We are not bothered about them. This hartal [strike] is by the people. We will not resort to any violence but are ready to sacrifice business for our rights,” said Mr. Ganai, adding that this was a civil protest against the Centre’s decision to revoke J&K’s special status.

“We are called terrorists when we go outside the State. Mobile phones are down. We are rotting in our houses. We do not trust any political leader. Leaders like Farooq Abdullah who stood with India have been put in jail,” he added.

Forty-five days and counting. Nu-Shi Nalini, the chemical tanker which ran aground, may finally be afloat, but the 2,400 metric tonne of naphtha, continues to be a sticking point for the Goa government as getting it safely out of the State continues to be a challenge. Marine Masters, a Netherland-based salvage company, appointed to salvage […]

In yet another huge catch, the district police arrested two inter-State smugglers, while they were allegedly transporting about 820 kg dry ganja in a lorry at Gokulapadu under S Rayavaram police station limits, in the district on Sunday. The police found that the smugglers were transporting the weed to Uttar Pradesh, where it is estimated […]