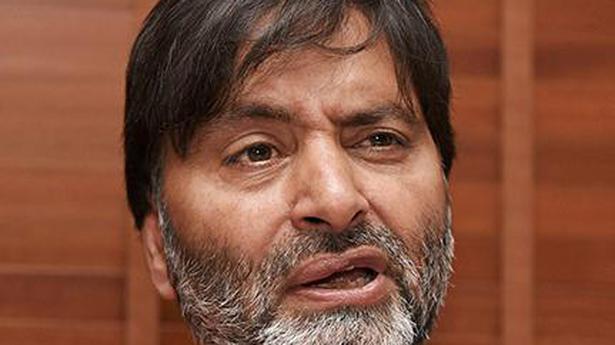 The family of the chief of the banned JKLF (Jammu Kashmir Liberation Front), Yasin Malik, has alleged that the 53-year-old separatist leader was in a “serious health condition” inside the Tihar Jail in New Delhi.

The family’s ‘disclosure’ sparked a shutdown in Lal Chowk’s Maisuma area on Saturday.

“We have not been allowed to meet Mr. Malik for the past 10 days. Today, the lawyer came to know that he was seriously ill. He has been on a hunger strike since April 16. He has been protesting against his illegal detention by the National Investigation Agency [NIA]. We fear for his life,” said Mr. Malik’s sister in Srinagar.

“In view of this emerging situation, the JKLF will hold a two-day hunger strike camp against this repressive Indian approach, in Islamabad and a five-day dharna outside the Indian embassy in London. We condemn the inhuman and ill-treatment. India will face serious consequences in case of any eventuality,” said Mr. Dar.

On April 10, the NIA was granted 13-day custody of Mr. Malik to probe a “terror funding” case.

Earlier, Mr. Malik, who was booked under the Public safety Act on March 7, was taken from the Kot Bhalwal Jail in Jammu to the Tihar Jail. On February 26, the NIA carried out searches in his residence in Srinagar.

Mr. Malik is to be produced before the NIA Special Court at Patiala House Courts in New Delhi on April 22.

On March 22, the Union Home Ministry banned the JKLF under Section 3 of the anti-terror law.

The school break is almost over for students from Classes 9 to 12. The Centre plans to restart classes in the distance mode next week, with teaching via dedicated TV and radio channels in English and Hindi, Human Resource Development Secretary Amit Khare said on Saturday. Many schools have been shut since early March due […]

The Kanchikacherla police registered a ‘Zero FIR’ on Wednesday following a missing person complaint lodged by a BC Welfare Hostel warden of Veerulapadu, which is located under the limits of Veerulapadu police station. The investigation was taken up immediately and the boy was traced within 24 hours. According to Kanchikacharla sub-inspector G. Srihari Babu, warden […]