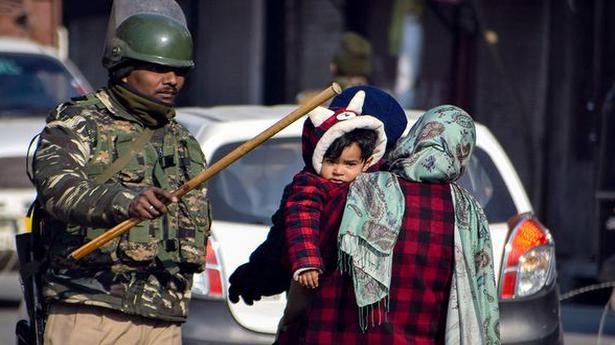 The authorities snapped the mobile Internet link in the Kashmir Valley on Sunday, as life was affected by the shut-down called by the banned Jammu and Kashmir Liberation Front (JKLF) and the Hurriyat to mark the seventh anniversary of the execution of Parliament attack case convict Afzal Guru.

The police have registered a First Information Report (FIR) against the JKLF for calling the shut-down and circulating a statement on it.

“The JKLF is a banned organisation, and publishing its statement is a crime and would warrant an action from now. JKLF statements are aimed at creating a law and order situation, and threaten the peaceful atmosphere,” said Vijay Kumar, Inspector General of Police, Kashmir.

Mr. Vijay Kumar said the journalists were “questioned as required in the case registered against the JKLF” under Sections 10, 11 and 13 of the Unlawful Activities (Prevention) Act.

“The investigators sought details of our family, relatives and friends, besides information on how we received the statement,” said a journalist who was questioned.

The statement was circulated from the outfit’s official email account. The police said they were looking for JKLF affiliates that circulated “the statements, urging for violence in the forthcoming days”.

The JKLF was banned in March 2019 and its chief Yasin Malik was shifted to Tihar Jail. It resumed issuing statements a week ago, after remaining silent for around six months.

A police officer said the 2G Internet service was stopped “as a precaution”. The shut-down affected life in the Valley, where most markets remained closed and traffic thinned out. But no violence was reported from any area.

Waryam Singh, a former chairman of Punjab and Maharashtra Cooperative (PMC) Bank, was arrested by the Economic Offences Wing of Mumbai Police on Saturday in connection with the alleged ₹4,355 crore scam at the bank. This is the fourth arrest in the case. The EOW has already arrested former managing director of the bank Joy […]

The cost of each robot is expected to be around ₹2.5 lakh, principal of ITI-Cuttack Hrushikesh Mohanty said. Source: thehindu.com Related