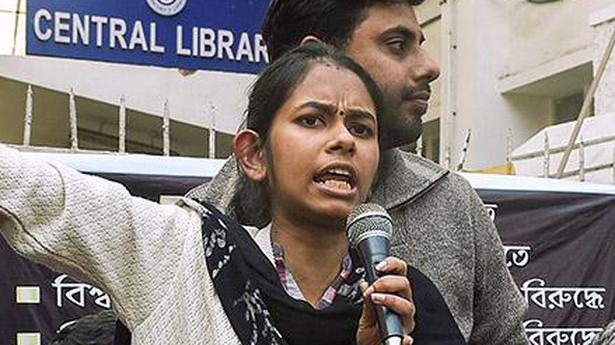 Jawaharlal Nehru University Students’ Union (JNUSU) president Aishe Ghosh was denied permission by Calcutta University authorities to enter the campus on Thursday to address a seminar on autonomy of universities.

Later, she stood on a chair, in front of the university gate, to address a few hundred students.

“In the fight against the BJP and the RSS, we have to understand which side we are taking,” she said.

Arguing that universities were free spaces to share ideas and that the Constitution was under “brutal attack”, Ms. Ghosh said that Hindutva forces were “branding all those speaking against their diabolical game plan as anti-nationals”.

“They are carrying out attacks on campuses. They are attacking girls. We must stand united against them,” she said.

Later, she led a rally alongside Left Front chairperson Biman Bose and CPI(M) State secretary Surjya Kanta Mishra. The CPI(M) has planned to organise many programmes in the State during Ms. Ghosh’s week-long stay, which commenced on Wednesday.

Actor-turned-politician Shatrughan Sinha joined the Congress on Saturday at the party headquarters in New Delhi.  He was with the BJP till recently. Hours later, the Congress announced his candidature for the Patna Sahib Lok Sabha cinstituency in Bihar to take on Union Minister Ravi Shankar Prasad. Congress general secretary K.C. Venugopal, party spokesperson Randeep Surjewala […]

: The Supreme Court on Thursday gave the Union government four weeks’ time to respond to a petition filed by advocate M.L. Sharma to quash the allotment, extension or continuation of leases for firms to operate 358 iron ore mines across the country. A Bench led by Justice S.A. Bobde asked the Centre to reply […]