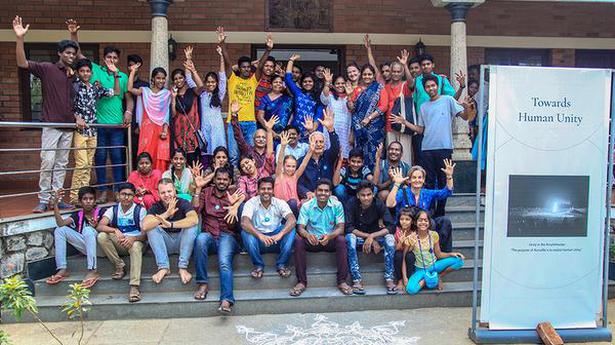 After touching select cities across the country, the ‘Journey of Auroville’, a travelling roadshow to propagate the ideals and projects of the universal township coinciding with its golden jubilee celebrations, is set to conclude with a series of cultural performances and workshops across Tamil Nadu.

The tour of culturally significant places in Tamil Nadu, the State that is the physical home of the international township of Auroville, which is being undertaken between March 11 and 26, will reach the first hub of the festival in Tiruchi on Wednesday (March 13-17).

Auroville, founded by Mirra Alfassa (The Mother), on February 28, 1968, to give a collective form to Sri Aurobindo’s vision of the value of humanity, had rolled out the ‘Journey of Auroville’, 50th anniversary national events in November 2017, with an exhibition and conference at the Indira Gandhi National Centre for the Arts and UNESCO regional office in Delhi

According to Auroville, it had since evolved into a festival format to engage a wider audience, and the first ‘Journey of Auroville’ festival took place in September 2018 in Vadodara, the city where Sri Aurobindo spent the first thirteen years after his return to India in 1893.

One of the highlights of the festival in Vadodara was the Auroville exhibition at the historic Premanand Hall at The Maharaja Sayajirao University of Baroda.

The next venue of the festival was Kolkata, the city where Aurobindo Ghose was born and where he later had transformative experiences in the early 20th century, which resulted in him becoming Sri Aurobindo.

This festival took place at the end of January 2019, with lectures, theatre performances, panel discussions, and a donation of books from Auroville to the National Library of India.

In Tamil Nadu, the festival will feature performances, workshops and exchanges in four hubs — Tiruchi, Madurai (March 17-21), Rameswaram (March 21-23) and Tiruvannamalai (March 23-25). The festival team is slated to return to Auroville via Gingee on March 26.

The festival aims to take a community-to-community approach to widen the nationwide awareness of the aims and ideals of Auroville on the occasion of its 50th anniversary. The key to understanding the ongoing experiment, that is Auroville, is based on its Charter which states, “Auroville belongs to nobody in particular. Auroville belongs to humanity as a whole. But, to live in Auroville, one must be a willing servitor of the divine consciousness.”

Auroville was conceived by The Mother as a place of an unending education, of constant progress, and a youth that never ages.

This concept based on the philosophical anthropology of ‘evolving consciousness’ was acknowledged by UNESCO even before Auroville’s formal inauguration in 1968: in fact, it was addressed in the first UNESCO Resolution, 1966. UNESCO has since framed four further resolutions on Auroville (1968, 1970, 1983, 2017).

The roadshows seek to raise understanding that Auroville, with people from more than 56 different nationalities, is a community of people beyond national borders and creed, united by their common aspiration for human unity and diversified ways of living that are in harmony with nature and spiritual values. The basic structure of the community with its participatory processes as well as the search for an economic system of prosperity outlines the overarching impact of progressive and sustainable development. As envisaged at the time of its founding, Auroville aspires to “be the bridge between the past and the future.”

For more details about venues and events, people can drop a mail to journeyoftamilnadu@auroville.org.in

May Day celebrations were organised by the Udupi unit of Centre of Indian Trade Unions (CITU) here on Wednesday. Speaking on the occasion, K. Mahantesh, secretary of State unit of CITU, said that the Narendra Modi government had failed in creating jobs for the youth in the last five years. The last five years had […]

BJP MP Pragya Singh Thakur on Monday said the Opposition is using a ‘marak shakti’ (killing power) to harm BJP leaders, adding the ‘evil power’ was behind the recent deaths of former Union Ministers Arun Jaitley and Sushma Swaraj. BJP veteran Arun Jaitley died on August 24 and Swaraj on August 6. “While I was […]

The CBI has attached nine wind turbine generators and land worth over ₹18 crore of Surat-based Nakoda Limited in connection with alleged loan defaults of ₹2,107 crore. The properties are located in Tirunelveli, Tamil Nadu. The CBI had earlier registered a case against Nakoda Limited, its chairman and managing director Babulal Gumanmal Jain, his son […]