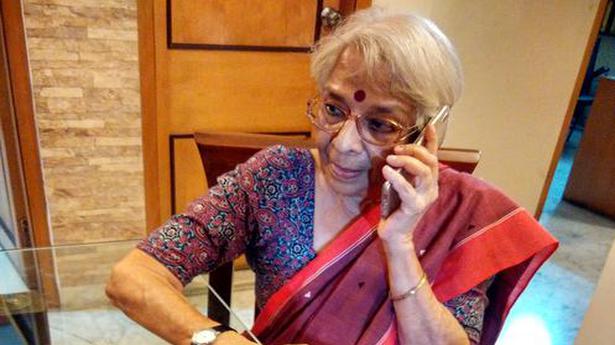 Her first reaction on knowing that her son Abhijit Vinayak Banerjee had won the Nobel Prize for economics was simple.

“The reaction wasn’t much. I was just happy,” said Nirmala Banerjee, who heard the news from her other son in Delhi.

Ms. Banerjee worked extensively on the “unorganised sector and women’s work” at the Centre for Studies in Social Sciences here and is an economist in her own right.

She has written “many books”, she said, compared with her son, while refusing to discuss in detail her work on the big day for the family.

“His father, Dipak Banerjee, too was an economist at Presidency College [now university],” Ms. Banerjee, who hails from Maharashtra, told The Hindu. So did Mr. Abhijit had his basic lessons from the book shelves in his earlier home on Mahanirban Road in south Kolkata? No.

“Rather, I think, he learnt from life. From the children he was playing with in the slum next to our house. Those days, all kids from various backgrounds used to play together and maybe, that is how he learnt by observing things,” Ms. Banerjee said.

Mr. Abhijit, an alumnus of South Point School, first showed interest in physics, then statistics and finally shifted to economics.

“[Because] he said he would not be having anytime for himself if he has to travel to B.T. Road [Indian Statistical Institute], he shifted to economics in Presidency,” she told presspersons.

Being an economist herself, Ms. Banerjee had taken a keen interest in Mr. Abhijit and Esther Duflo’s work. “She [Ms. Duflo] came here and worked on health and economics,” she said. However, she admits that she does not understand much of the “complex mathematical part”.

“But from what I understood is that his work is largely about people. Economics is about society and the people and he focused a lot on that… what ails people and how to address the issues… to make difficult things sound simple. That in fact is the work,” she said. The mother often brought his attention to issues on Indian economy like — in her words — taxpayers’ situation. “I told him if you [Prof Banerjee] are following the tax payers issues [tax increase] and if this is right or wrong. He said yes and I think he discusses this with his colleagues,” Ms Banerjee told the journalists in her south Kolkata apartment. He is also a “supporter” of the MGNREGA scheme, she added.Whether such support and strong criticism of demonetization may land Prof Banerjee in trouble in India was one of the questions asked to Ms Banerjee.

“He does not get angry ever. He is too cool and I know he will handle it calmly, while answering criticisms carefully,” Ms Banerjee signed off.

A large number of devotees began taking a holy dip in the Sarayu river on Kartik Purnima amid tight security in Ayodhya on Tuesday, the first religious congregation in the temple town since the judgement in the Ayodhya title suit case. People began flocking to the ghats since early the hours amid chants of “Sita […]

In a tragic incident, a poor family carried the body of an 80-year-old woman, Chandrama Singh, on a tricycle on Tuesday after she died at the MKCG Medical College and Hospital in Behrampur, Odisha. Chandrama’s family said they had opted for this mode of transportation as they could not arrange an ambulance or hearse. On […]

Close shave for four as car goes up in flames

A major mishap was averted when a running car caught fire near Yendada Junction on NH-16, allegedly due to short-circuit under Arilova Police Station limits, in Visakhapatnam on Saturday. Fortunately, no causality has been reported, as four members of a family, who were in the car, got down immediately after noticing the sparks. According to […]