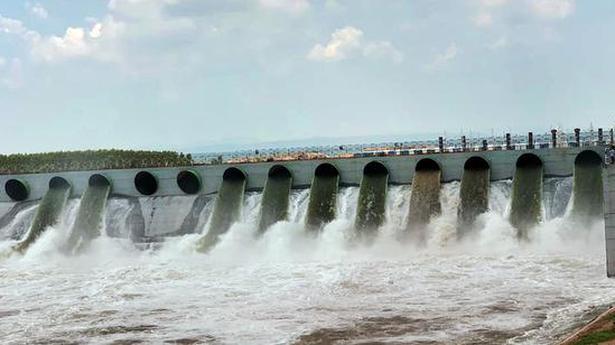 Water being lifted from Medigadda barrage, constructed across the river Godavari after the confluence of tributary Pranahitha with it, as part of Kaleshwaram project is likely to start flowing to Mid Manair reservoir through Laxmipur pump house in the second fortnight of August.

Pumping of water from Medigadda barrage to Annaram barrage through Kannepally pump house commenced on July 6 with one motor and gradually five more motors were made operational.

Similarly the process of pumping water from Annaram barrage to Sundilla barrage was taken up on July 20 with operation of one motor and addition of one more on Tuesday.

“We are planning to operate four out of eight motors required to lift one tmc ft water a day this season at the pump house linked to Annaram barrage by the month-end and the remaining four needed for lifting one more tmc ft by the end of August first week. Similarly, operation of the pump house linked to Sundilla barrage to lift water to Yellampally barrage would be taken up once the water level in Sundilla reaches 127 meters level against the full reservoir level of 130 meters,” Engineer-in-Chief of Kaleshwaram project N. Venkateshwarlu told The Hindu.

Since the wet run of four motors at Nandi Medaram pump house has already been completed the process remains to be taken up only at Laxmipur pump house with water from Yellampally through Nandi Medaram. The operation of Laxmipur pump house would enable gravity flow of water to Mid Manair reservoir located at a distance of about 43 km. From there water could be taken to Lower Manair through the Manair river course to supplement the ayacut of Sriramsagar project in the erstwhile undivided Karimnagar district.

Mr. Venkateshwarlu explained that they would not impound Medigadda (16.7 tmc ft), Annaram (10.87 tmc ft) and Sundilla (8.83 tmc ft) barrages till FRL this year and this was in tune with the procedures as they had to see how the barrages withstand the hydrological pressure and the strength of guide bunds (flood banks). As on Tuesday, the storage in Medigadda and Annaram stood at 7 tmc ft and 6 tmc ft, respectively, with levels of 96.5 metres and 116.55 metres.

Meanwhile, the spread of water in the river course due to storage in Medigadda and Annaram barrages has already started showing impact on the groundwater in the nearby areas.

Citing an example, a project engineer stated that water was gushing out from tubewells at Damerakunta village of Kataram mandal in Jayashankar-Bhupalapally district with the sudden increase in groundwater table.

6,000 posts of constable to be filled this year

Minister for Home Basavaraj Bommai on Friday said 16,000 police constable posts were vacant in the State and these would be filled in stages, with recruitment to 6,000 posts expected to done by the end of the year. The Minister was speaking after taking part in the passing-out parade of the 42nd batch of probationary […]

Hitting back at Rahul Gandhi for his Savarkar jibe at the BJP, the ruling party on December 14 said a “more appropriate” name for the Congress leader is “Rahul Jinnah” as his “Muslim appeasement” politics makes him a worthy legatee of the Pakistan’s founder. Addressing the Congress’ mega Bharat Bachao Rally at Ramlila grounds in […]

Couples who divorce by mutual consent subject to contempt if they don’t abide by conditions of compromise: SC

A couple who choose to divorce by mutual consent will be susceptible to contempt of court if they do not abide by the various conditions of compromise finalised by the court, the Supreme Court has said. In a recent order by a Bench led by Justice R. Banumathi, the apex court used its extraordinary powers […]