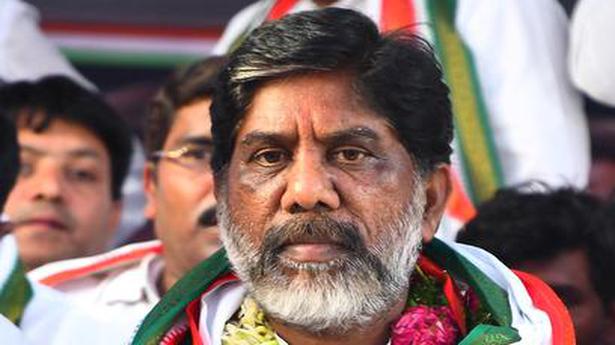 Congress Legislature Party (CLP) leader in Telangana M. Bhatti Vikramarka on Friday alleged that the “interests of Chief Minister K. Chandrasekhar Rao” and his family are behind the redesigning of Kaleswaram irrigation project, which has seen an escalation in cost.

The project was originally initiated as the ‘B.R. Ambedkar Pranahita Chevella project’ at a cost of ₹38,000 crore during the Congress regime of late Y.S. Rajasekhara Reddy in undivided Andhra Pradesh, he told the reporters.

The name of the project was changed to Kaleswaram project after it was redesigned by the TRS government, he said.

The estimates of expenditure on it was initially put at ₹80,500 crore, which has now been increased to more than ₹1 lakh crore,” he claimed.

“The cost of then Babasaheb Ambedkar Pranahita Chevella project cost was only ₹38,000 crore, ₹10,000 crore had already been spent in the undivided State (Andhra Pradesh) on the project. The balance amount to be paid was only ₹28,000 crore,” he said.

Under the EPC contract system, the contractor would have to hand it over after completion for ₹28,000 crore without the State government being concerned about any rise or fall in project cost, he said.

Had the project been continued without redesigning, 16.50 lakh acres would have got irrigation facilities for only ₹28,000 crore, he claimed.

The State government has already spent ₹50,000 crore after renaming the project without a single acre getting water, he said.

The power project is additional to the ₹1 lakh crore expenditure, he claimed.

If the issues related to Kaleswaram are studied in depth, it is clearly seen that the interests of KCR and his family are behind this whole redesigning more than the State’s interests, Mr.Vikramarka said.

The State government announced that the Kaleswaram irrigation project would be inaugurated on June 21. Mr. Rao travelled to Mumbai on Friday to invite his Maharashtra counterpart Devendra Fadnavis for the inauguration. Andhra Pradesh Chief Minister Y.S. Jagan Mohan Reddy would also be invited, the government had said.

Mr.Vikramarka alleged that the TRS regime was trying to prevent the corruption behind the project by merging MLAs who might question and also giving an impression to people that the project is a wonder in engineering and execution.

He claimed that the Detailed Project Report (DPR) of the project has not been provided to MLAs. The Ambedkar Pranahita Chevella project, initiated by Rajasekhara Reddy, who was a Congress Chief Minister, would have benefited Telangana people in a big way, he said.

“Is Rao trying to make Jagan Mohan Reddy, by inviting him, say that what Rajasekhara Reddy did was wrong and what he did was right?” Vikramarka asked.

He told Jagan Mohan Reddy that his presence at the inauguration would go on to prove that what Rajasekhara Reddy did was wrong.

The Kaleswaram project on Godavari river is expected to supply water to 70% of districts in Telangana for agriculture, drinking water and industrial purposes, according to official sources.

The Kerala Rail Development Corporation (KRDCL) is confident that the ₹66,405-crore Thiruvananthapuram-Kasaragod semi-high-speed rail corridor project (named Silver Line) for which year 2024 has been set as the deadline, will be economically feasible and attain operational break-even, within 10 years of being commissioned. Of the total cost of the 532-km project, around 50% will be […]

It asks State to follow its own policy for admission to postgraduate medical courses as well Source: thehindu.com Related

The Mizo Zirlai Pawl (MZP, Mizo Students’ Union) has slammed Chakma political leaders and NGOs for writing to Prime Minister Narendra Modi, complaining about victimisation through an allegedly illegal National Register of Citizens (NRC), and demanding that the Mizoram-Myanmar border be sealed.   Mizoram and Myanmar share a 404km-long border and an agreement between the […]