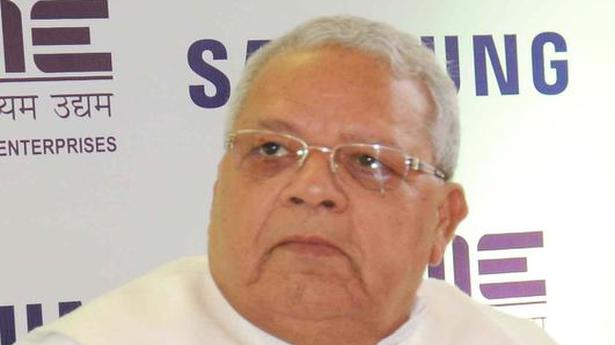 A Rashtrapati Bhavan press communique said the appointments of Mr. Mishra and Mr. Devvrat will come into effect from the dates they assume charge of their respective offices.

Mr. Mishra (78) had resigned from the Narendra Modi-led government as Minister for Micro, Small and Medium Enterprises in 2017 after he crossed the age of 75, the BJP’s unofficial age limit for holding an elected post.

The Uttar Pradesh leader did not contest the last Lok Sabha election.

Mr. Devvrat (60) was appointed as Governor of Himachal Pradesh in 2015. He will replace Governor of Gujarat O.P. Kohli, who retires on Monday.

Hundred hours have passed since ‘janata curfew’, dubbed as a dry run of the prolonged lock-down imposed in the country for COVID-19, Ohi Appa Rao (60), a ragpicker, has had just eight packets of biscuits to survive on. Appa Rao considers himself lucky for having access to biscuits as some benevolent passers-by stumbled upon him […]

Reiterating her opposition to the Citizenship (Amendment) Bill on the day it was tabled in the Lok Sabha, West Bengal Chief Minister Mamata Banerjee on Monday termed it as the same as the National Register of Citizens (NRC). She said not a single citizen should be forced to leave the country. “No NRC, no divide […]