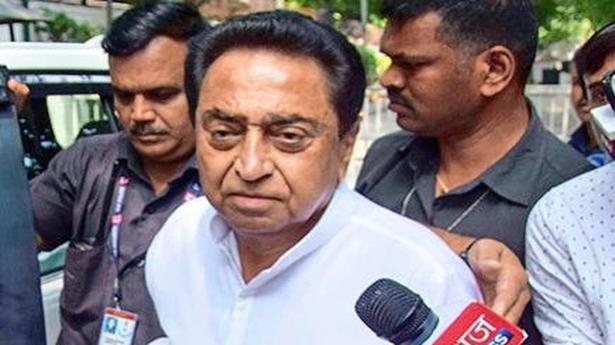 Mr. Nath also heads the MPCC and reports say his colleague and former Lok Sabha member Jyotiraditya Scindia is peeved at being “sidelined” from State politics. He is reported to have given an ultimatum to his party or he could explore other options. Asked about it, Mr. Nath said, “I don’t believe it. I don’t think that’s the case.”

Mr. Scindia’s supporters, including Ministers in the State government, have been quite vocal about making him the State chief and were upset with the party for making him the Chairman of the Screening Committee to decide candidates for the Maharashtra Assembly elections. They argued that it was a way to keep Mr. Scindia out of M.P. politics while other names like Ajay Singh, son of late Arjun Singh, were being considered.

“I have been saying for the past six months that there should be a new Congress chief and I repeated it today. Since I became the Chief Minister, I had suggested to appoint a chief but I was asked to continue because of the Lok Sabha elections,” Mr. Kamal Nath told reporters after meeting Ms. Gandhi.

For the interim Congress chief, it has been literally a firefighting exercise as her meeting with Mr. Nath comes a day after she met former Haryana Chief Minister Bhupinder Singh Hooda.

Mr. Hooda has been insisting on changing State chief Ashok Tanwar, who was appointed by former Congress president Rahul Gandhi five years ago. Indicating that he could even leave the party ahead of the Assembly election, Mr. Hooda had even organised a massive public rally in Rohtak on August 18 as a show of strength.

The Supreme Court on Thursday said it will pronounce on September 5 the order on plea of former finance minister P Chidambaram in the INX Media money laundering case lodged by the Enforcement Directorate. A bench of Justices R Banumathi and A S Bopanna also extended interim protection from arrest granted to Mr. Chidambaram till […]

Several policemen, including an Assistant Commissioner of Police (ACP), were injured in stone throwing at a protest march against the Citizenship Amendment Act (CAA) and the National Register of Citizens (NRC) in the Shah-E-Alam area of Ahmedabad on Thursday. Police had lobbed teargas shells to disperse a mob of around 2,500 people, when some started […]

The Cabinet on Thursday approved an ordinance to return faculty reservations in higher education institutions to the “200-point roster system”, whereby the University or college as a whole is considered as a unit, rather than each department. This has been a major demand of a number of agitating teachers and student unions as well as […]