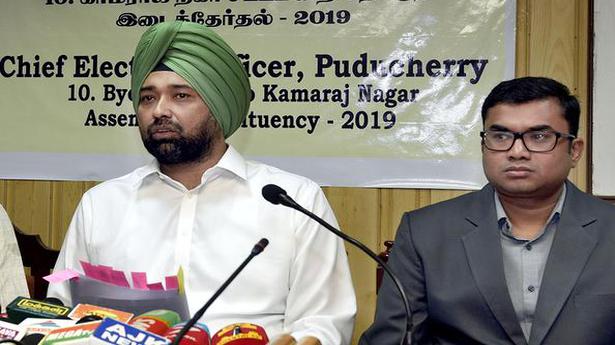 Chief Electoral Officer Shurbir Singh on Saturday said the administration had declared a holiday on October 21 for all government offices, educational institutions and private establishments located within the jurisdiction of Kamaraj Nagar constituency.

Addressing a press conference here, Mr. Singh said the holiday had been declared under Section 25 of the Negotiable Instruments Act, 1981 for people to vote in the Kamaraj Nagar byelection.

The District Election Office had made all arrangements for the peaceful conduct of the byelection. In addition to the territorial police, one company of the Central Armed Police Forces would be deployed, he said.

Polling materials would be distributed from Motilal Nehru Government Polytechnic to polling booths, he said. The counting centre had been set up at the polytechnic itself.

Three tier security arrangements had been provided for the strong room at the counting centre. The strong room would be under the surveillance of closed circuit television cameras, the CEO said.

A case has been booked against Congress candidate A. John Kumar for the Kamaraj Nagar bypoll for violating the model code of conduct. Based on a complaint, the Grand Bazaar police have registered a case against Mr. Kumar for promising to give free cable television connection in Kamaraj Nagar if elected, said Mr. Singh.

Kashmir situation will be on agenda during talks with Prez Kovind: Swiss govt.

Ahead of President Ram Nath Kovind’s visit to Switzerland, the European country on Friday said situation in Kashmir and other regional matters will be among the issues that will be discussed during the meetings that the Indian leader will have with the top Swiss officials. Mr. Kovind will embark on a three-nation tour next week, […]

Prime Minister Narendra Modi on Saturday hailed the Indian judiciary for redefining environmental jurisprudence to strike a balance between development and ecological protection. Speaking at the inaugural function of the International Judicial Conference 2020 — ‘judiciary and the changing world’ at the Supreme Court, the Prime Minister referred to gender justice and said no country […]