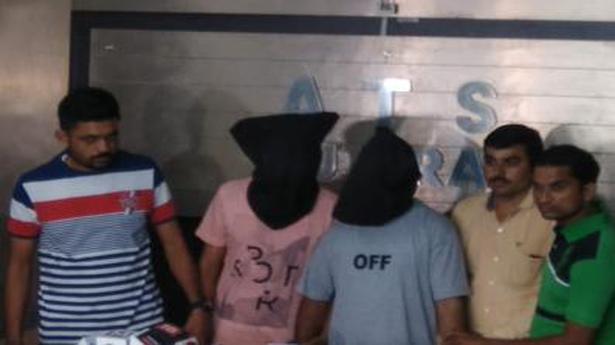 The Gujarat Anti-Terrorism Squad (ATS) on Tuesday claimed to have arrested the two main suspects who allegedly committed the murder of Hindu Samaj Party leader Kamlesh Tiwari in Lucknow on October 18.

The two suspects were nabbed from Shamlaji near the Gujarat-Rajasthan border, police said, adding that they were on the way to Gujarat after having reached Shahjahanpur from Nepal.

The duo was identified as Ashfaqhussain Jakirhussain Shaikh, aged 34, and Moinuddin Khurshid Pathan, aged 27. Both are residents of Surat, the Gujarat ATS said. While Shaikh is a medical representative, Pathan is a food delivery boy, police said.

The primary investigation of the accused persons reveals that they had committed the crime “in retribution to purported statements by the deceased,” the ATS said.

In 2015, Tiwari has shot into the limelight after he made controversial remakes about Prophet Mohammad following which several Muslim groups held huge protests demanding action against him.

Six persons, including two Muslim clerics from Bijnor in West UP, have already been detained on charges of allegedly scripting the conspiracy behind the murder.

Tiwari was murdered in his house in the Naka area of Lucknow by two suspects, one of whom was shown by CCTV footage to have worn saffron clothes.

The clothes, along with the alleged murder weapon, a knife, were recovered from a Lucknow hotel by police on Sunday.

Congress president Rahul Gandhi’s declaration that the poorest families in the country will be given ₹72,000 annually is nothing but an eyewash just like Prime Minister Narendra Modi’s ₹15 lakh deal, Finance Minister T.M. Thomas Issac has said. ‘‘We welcome all schemes benefiting the poor, but cheating them with impractical promises is not acceptable,’’ he […]

Forest Minister Satish Jarkiholi’s supposed opposition to Energy Minister D.K. Shivakumar supervising the elections in North Karnataka, yet again, underlines the manner in which the family bands together, irrespective of their political opinions, when their “territorial authority” is questioned. His brother Ramesh Jarkiholi, who has now distanced himself from the Congress and is said to […]