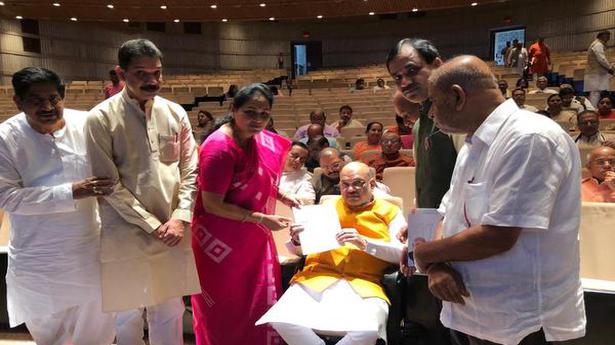 Ms. Karandlaje informed the Home Minister that Siddartha is a resident of her Udupi-Chikmagalur parliamentary constituency and he has been missing since July 29 in the Dakshina Kannada district of Karnataka.

The State government has already started search operations in the Netravati bridge area. Since it is raining in the coastal Karnataka, the water level in the river has gone up to a serious level, she said in a representation made to Mr. Shah.

“The heavy rains and the current weather conditions in Karnataka is causing problem for the speedy search operation. Therefore, I request your good self to help government of Karnataka by sending coastal guard, central forces and helicopters in this search operation…,” she said.

Enthusiasm missing among fishermen to venture into sea

Having incurred losses continuously post-Cyclone Hudhud in October, 2014, a section of fishermen will take part in new fishing season from early hours of June 15 with a ray of hope for a bountiful catch. Faced with an adverse situation for fishing in the wake of increase in ocean pollution caused by indiscriminate use of […]

The Aligarh Muslim University Students’ Union (2018-19) has strongly condemned the brutalities committed against the students of Jawaharlal Nehru University on Sunday night. Describing it as an act committed by “the masked goons affiliated to ABVP having the patronage of the Union Government,” the statement said, “the visuals and media reports describing the hostage-like situation […]