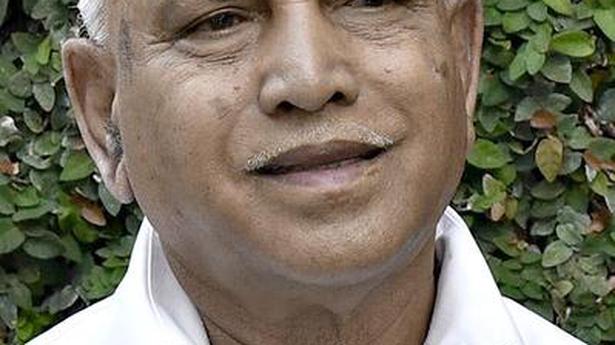 Karnataka Chief Minister B.S. Yediyurappa on Friday got the green signal from the BJP Central leadership for the much-awaited Cabinet expansion in the State and he is mostly likely to induct 11 Ministers.

Yediyurappa said the date of swearing-in will be decided in a day or two, although he indicated that it would most likely be held on February 3.

Currently, there are 18 Ministers, including the Chief Minister, in the Cabinet that has a sanctioned strength of 34. Sixteen Berths are vacant.

“Many of our suggestions have been accepted by Home Minister Amit Shah and BJP national president J P Nadda. If there are differences, we will discuss in Bengaluru and finalise it,” Yediyurappa told reporters after meeting Mr. Shah in the Parliament Complex in New Delhi.

Except for one or two, most of the disqualified JDS-Congress MLAs who got re-elected in the bypolls on BJP tickets will be made Ministers, he said, adding there won’t be any additional Deputy Chief Ministers.

However, sources said, a total of 11 Ministers would be inducted into the Cabinet.

“We discussed yesterday and now also. Mr. Shah has agreed to almost everything,” Yediyurappa said, adding he is returning back “happy” after getting the nod for the Cabinet expansion.

Yediyurappa had been anxiously waiting for the Party high command’s approval to expand his Ministry amid intense lobbying by the aspirants.

Opposition Parties have been critical of the BJP and Yediyurappa over the delay in the Cabinet expansion, alleging he was weak and that his administration had collapsed.

Observing that Karnataka Power Transmission Corporation Ltd. (KPTCL) had left a retired employee “fall on the thorns of life and bleed” by not paying terminal benefits even 21 years after retirement, the High Court of Karnataka set a two-week deadline to pay all that is due to him. The KPTCL will have to pay 9% […]

As many as 26 people tested positive for COVID-19 in Hassan on Sunday. With this, the total number of confirmed cases has risen to 26,374. Among these, so far, 25,334 have recovered and 616 are undergoing treatment. Including two deaths on the day, so far 445 people have died in the district. Among cases reported […]