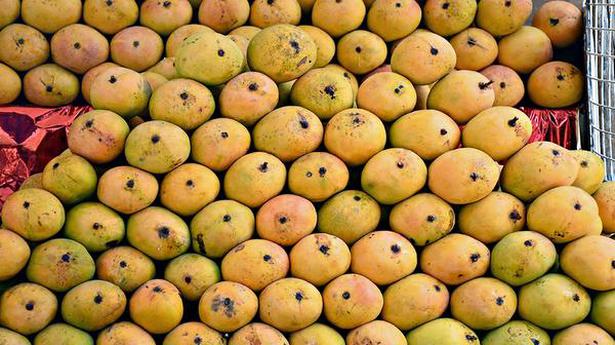 The king of fruits is all set to flood the markets with Karnataka expecting a bumper mango harvest this year.

The popular varieties have already hit the markets while others are expected between May and June. The prices are expected to stabilise once the arrivals increase.

What was earlier predicted to be an off-year for the crop as the previous year turned out to be a good one will be good now, thanks to widespread flowering in four stages since December. Fruiting too occurred in sizeable numbers despite droppings in some mango-growing areas due to unseasonal rains and hailstorm.

Attributing the change in fruiting pattern to change in climatic conditions with the State in the grip of an extreme dry spell and severe heat, the authorities have anticipated a production of at least eight lakh tonnes of mango this year provided there are no heavy rains and hailstorms in the weeks ahead.

Horticulture specialist S.V. Hittalmani, who retired as the Additional Director of Horticulture handling the fruits division, told The Hindu that fruits have started arriving in full scale with growers harvesting abundant yield in areas like Ramanagaram. Fruits from Kolar and Chickballapur districts were expected soon, he added.

The size of the fruit will improve in case of moderate rains now. But heavy rain can result in fruit dropping besides outbreak of diseases like Anthracnose (developing of black pigments on the fruit) and damage by fruit flies.

On the overall production this season, Dr. Hittalmani, who toured the mango-growing areas with others from the Department of Horticulture, said the Technical Committee on Mango and the Mango Board have estimated the yield (based on the current crop situation and arrivals) at 8 lakh tonnes. “The estimate may be nearer to the truth as various parameters had been taken into consideration before they are prepared,” he replied.

Last year too was an on year for the crop but the yield dropped as the fruit got spoiled for various reasons. The final output last year was between 7 lakh tonnes to 7.5 lakh tonnes. “We are hoping for a much higher yield and better fruits as well this season,” Dr. Hittalmani said. The price could be moderate compared to last year but it all depends on the varieties and the choice of mango lovers. “Fruits won’t be pricey when arrivals are heavy,” he replied.

Despite the arrival of new varieties of mango, they haven’t been received as well as the older and popular ones which have been ruling the markets for decades now. In Karnataka, there are over a dozen varieties of mango that can be described as bestsellers in every season.

“There is very little scope for new varieties. But research on the new ones has continued although people have limited choices of the fruit in different States,” says horticulture specialist S.V. Hittalmani.

The liking for the fruit is also region and State-specific. For instance, people in Maharashtra prefer Alphonso over other varieties. In Karnataka, the acceptance is more for varieties like Raspuri, Badam, Malgoa and Mallika. In Andhra Pradesh, it’s Saindoora, while people in Tamil Nadu prefer the Neelam variety. Mankur or Mankurad in Goa, Kesar in Gujarat, Malda in West Bengal, Langda or Langra in Bihar are among the widely-accepted mango varieties, he said.

CBI takes over probe into murder of BJP worker in Dharwad

The Central Bureau of Investigation (CBI) has taken over the probe into the 2016 murder of Bharatiya Janata Party (BJP) worker Yogesh Gowda in Karnataka’s Dharwad. Mr. Gowda was found murdered in his gym on June 15, 2016. The State police had earlier completed the probe and filed a charge-sheet against six accused persons on […]

The Supreme Court on Tuesday agreed to urgently list a petition filed by Anuradha Bhasin, Executive Editor of Kashmir Times against the information blackout and restrictions imposed on media freedom during the Centre’s “unilateral” move to impose curfew and unravel the unique federal structure of India by dividing Jammu and Kashmir “without taking consent from […]

Chief Electoral Officer (CEO) Gopal Krishna Dwivedi has pegged the number of staff required for counting votes on May 23 at about 21,000 and said the places of their deployment will be kept as a secret till the last minute. Randomisation of the Electronic Voting Machines (EVMs) would be done twice after the completion of […]