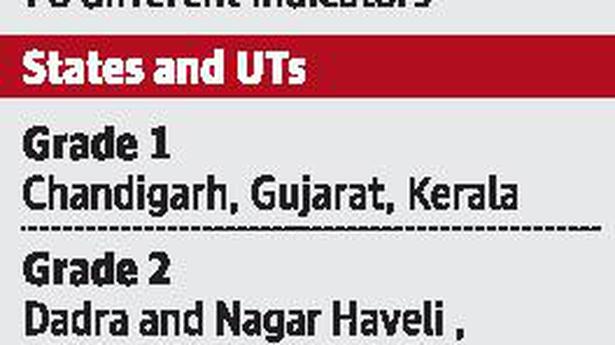 Karnataka may have taken up several innovations in school education, but it still has a long way to go. This was reflected in the ‘Performance Grading Index (PGI) 2017-18 – Catalysing transformation change in school education’ report that was released recently by the Ministry of Human Resource Development (MHRD). Karnataka appears in the third grade out of seven grades. This index takes into account scores from 70 indicators.

The grading, done on five key parameters — learning outcomes and quality, access, infrastructure and facility, equity, and governance processes, is being followed by all States and Union Territories. While the State’s performance in terms of equity, infrastructure, access and quality is above normal, its score in the governance of schools is not up to the mark. Karnataka, however, has done well in learning outcomes and quality parameters where it shares the second spot along with Chandigarh.

The report showed that the State government has been slow in releasing funds for various activities.

Over two years ago, when scientists at Dr. APJ Abdul Kalam Missile Complex were working on a project to directly hit an incoming missile, the Central government mandated a few of them to develop a missile for intercepting satellite in low-earth orbit. Though only five scientists were involved when the missile was conceptualised, gradually more […]

COVID-19 a health crisis and not a law and order situation, says Chennithala Source: thehindu.com Related

One of the three children, who suffered severe burns while playing in front of their house at Nellikatte, died at a hospital in Kozhikode on Friday morning. The deceased has been identified as 8-year-old Fathima, daughter of A.T. Thajudheen, a resident of Nellikatte. She had sustained 90% burn injuries. The children were playing inside a […]