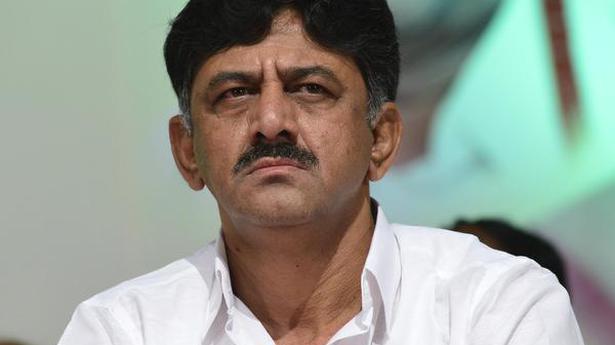 Karnataka minister D.K. Shivakumar on Monday strongly opposed an NGO’s efforts in the Supreme Court to re-kindle a land-grabbing case against him.

The apex court had, on February 21, allowed the petitioner, Kabbale Gowda, to suddenly withdraw the case which had been pending for the past three years.

The land-grabbing allegations in the case involves people across the Karnataka political spectrum, including former Karnataka chief minister B.S. Yeddyurappa

On Monday, before a Bench led by Justice S.A. Bobde, Mr. Bhushan said the case was one of “corruption and crime”. He alleged that neither the State Lokayukta nor the State government had challenged the Karnataka High Court decision in December 2015 to quash the entire proceedings in the case.

“How does the State not challenge the quashing of its own case?” Mr. Bhushan asked.

Mr. Bhushan argued that Karnataka government was itself in cahoots with the powerful accused persons.

He said eventually private petitioners like Mr. Gowda have also been compelled to withdraw their case, compelling the NGO to take up the fight. Mr. Bhushan said the case was withdrawn on February 21 without even informing the NGO, which was an intervenor.

Senior advocate Kapil Sibal, for Mr. Shivakumar, questioned the locus standi of the NGO to seek a re-call of the withdrawal order of the court.

“What made you entitled to seek withdrawal?” Mr. Sibal asked.

Mr. Bhushan responded that every citizen has a right to intervene in a criminal matter. “Can anyone step in at any time?” Justice Bobde asked.

The court said it would hear in detail the limited question on the locus standi of the NGO and posted the case for hearing after Holi break.

The case revolves around a piece of land measuring over five acres and dates back to 1962. The then-purchaser decided to convert the land use of over four acres from agricultural to industrial. The Bangalore Development Authority (BDA) acquired the land in 1986. Despite the acquisition, Mr. Shivakumar, who was then the urban development minister, purchased the land from the original owner for ₹1.62 crore in 2003, the petition said.

The petition said the land registration was done despite revenue documents showing that the land stood in BDA’s name.

“Accused Yeddyurappa, in his capacity as the Chief Minister, de-notified the land from acquisition proceedings on 13.5.2010. This was done unilaterally despite there having been a specific file noting asking the file to be placed before the de-notification committee on 23.7.2009. The officer who recommended that the file be put before the de-notifcation committee was immediately transferred out,” the petition in the apex court had submitted.

The petition had alleged that Mr. Shivakumar subsequently entered into joint agreements with other companies to develop the land in both 2004 and 2011.

‘Why not raise penalty in doses?’

There is a mixed response in Central Kerala to the approximately 10-fold increase in fine amounts for traffic offences, on which the State government is expected to take a call on Monday. Officials of the MVD and the police say this is an absolute necessity to reduce accidents which claimed 4,300 lives in Kerala and […]

Gujarat Vijay Rupani Even before the national lockdown came into effect, Gujarat chief minister Vijay Rupani had realised that the state was heading for some unusual times. This was reflected in one of his early decisions after the virus raised its head in the state, converting Ahmedabad’s new 1,200-bed civil hospital into an exclusive COVID-19 […]