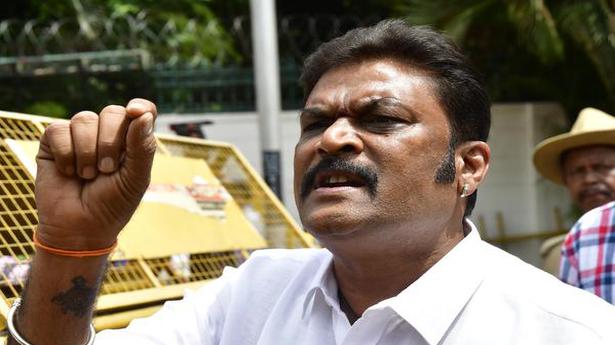 Five more rebel Karnataka MLAs urgently moved the Supreme Court on Saturday, saying they are being “threatened and intimidated” into supporting the H.D. Kumaraswamy government in the proposed floor test.

The five legislators — Anand Singh, Dr. K. Sudhakar, N. Nagaraju, Munirathna and Roshan Baig — said they are in an identical situation as the earlier 10 MLAs who have approached the apex court against the Speaker and Mr. Kumaraswamy.

The MLAs said, despite having submitted their resignation, they are being “threatened to support the government on the threat of disqualification” in a floor test announced by Chief Minister Kumaraswamy on the floor of the House on July 12.

The 24-page application said Mr. Singh resigned on July 1, Mr. Munirathna followed on July 6 and the other three put in their papers on July 10.

The legislators, represented by advocate Subhranshu Padhi, said there is not need for a probe by the Speaker into whether their resignations were “voluntary or genuine” as they had submitted their letters in persons. Besides, they have filed separate sworn affidavits in the apex court saying their signatures on the resignation letters, which they tendered in person, are their own and genuine. The affidavits have been filed to obviate any doubts of the voluntary nature of their resignations.

They said this would answer the conditions mandated under Article 190 of the Constitution and under Rule 202 of the Rules of Procedure and Conduct of Business of the Karnataka Legislative Assembly. The writ petition filed by the rebel MLAs should be allowed on this ground alone.

“The subsequent disqualification petition is absolutely without any grounds. This was filed by the Congress party on the ground that the MLAs have not attended the Legislature Party meeting held outside the House. The non-attendance of the meeting outside of the House is not a ground for disqualification,” the MLAs argued.

Seeking to implead, the MLAs said the court should implement its order of July 11 asking the Speaker to decide on their resignations forthwith or within the remaining part of the day. They said they were manhandled and confined by certain persons within the premises of the House when they sought to submit their resignation on July 10. Police personnel had to escort them to safety.

Police assault another doctor in Nagaland

Less than a week after three policemen apologised to a doctor for assaulting him, another doctor on COVID-19 duty has allegedly been roughed up in Nagaland. Mongshithung Murry of Wokha town on Friday wrote to Wokha district’s Superintendent of Police requesting him to sensitise his personnel to “desist from resorting to savage and barbaric acts,” […]

The three-year agreement signed by Metals and Minerals Trading Corporation (MMTC) for export to Japan and Korea has helped Visakhapatnam Port Trust to register impressive performance during the first quarter of the current fiscal brightening the hope that it will improve its ranking next year. Sources told The Hindu that the port had handled an […]