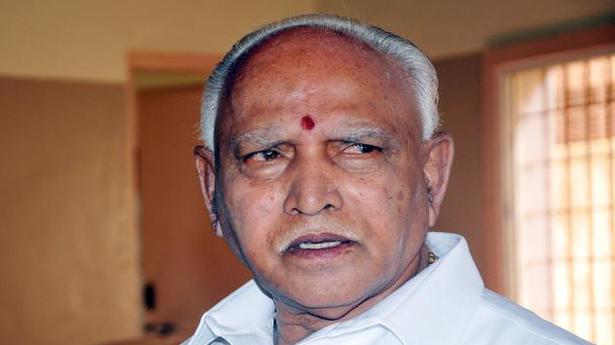 Karnataka Chief Minister B.S. Yediyurappa is seeking the trust vote in the State Assembly, and is expected to sail through the exercise. In the legislature party meeting on Sunday evening, the party asked its MLAs to assemble at Vidhana Soudha on Monday for the session.

Though the BJP vehemently opposed the Speaker’s decision to disqualify rebel MLAs, the decision also came as a relief for the party as the coalition leaders were still trying to woo back the rebels. Senior BJP leader R. Ashok had been with the rebels for the past four days to prevent any setback.

Here are the updates, with inputs from our Bengaluru Bureau.

Speaking in the House, former Chief Minister and JD(S) leader H.D. Kumaraswamy refuted Mr. Yediyurappa’s claim that the administration had been in a standstill state for over an year.

“I need to answer to my conscience, not to any of you. In the past 14 months, I have tried my best to respond to the problems of people. I thank God for giving you an opportunity to look for the records yourself and tell the truth to the people about how my government tried with all honesty to waive off farm loans,” he said.

“The President has given his approval for the private loan waiver act. Today morning also a woman from Davanagere approached me saying a money-lender has been demanding ₹5 lakh payback for a loan of ₹30,000. I request the government to ensure rules are framed for the Act and it is widely publicised to the public across the State to ensure writing off of these loans,” Mr. Kumaraswamy said.

In an obvious dig, Mr. Kumaraswamy chided Mr. Yediyurappa that he did not thank the rebel MLAs who were the biggest reason he became the Chief Minister. “BJP has now brought them to the streets. Now I don’t know when they will become devils and come back at you,” he said.

Welcome Yediyurappa’s statement that he won’t practice the politics of vendetta: Siddaramaiah

“I can tell how Yediyurappa became Chief Minister, but I won’t since we have discussed it at length for four days in this House. I congratulate him for becoming the CM and welcome his statement that he won’t practice the politics of vendetta,” says Mr. Siddaramaiah.

“But the Chief Minister said the administration has come to a standstill in the State and he will restore it – but that’s not true. Administration has not come to a standstill. The coalition government has honestly tried to implement the common minimum programme. We have waived off farm loans and also brought in an act to waive off personal loans. The coalition government has continued all programmes that my government had started,” said the former CM.

Referring to the goals set and achieved during his tenure and the government that followed him, Mr. Siddaramaiah said that he had taken steps to helps the farmers and weavers communities.

“You have announced that the State government will give an additional ₹4000 from the State exchequer apart from the ₹6000 under the PM Kisan Samman Yojana,” he said.

“But I would like to remind the house that in the last budget I presented in 2018 I had introduced a scheme called “Raita Belaku” under which dry land farmers would get a cash subsidy of ₹10,000. But it was not implemented due to farm loan waiver. I had also waived the loans of weavers. I would like to congratulate him for reitirating these schemes,” he added.

‘Yediyurappa does not have people’s mandate’

“Yediyurappa said he would give a government as per people’s mandate. But I would like to remind Yediyurappa that BJP has no mandate. Yediyurappa has been in politics from 1983. Both of us entered the House the same year. But it’s sad that he never once got the mandate of the people,” said the CLP leader.

“In 2010 he got 110 seats and in 2018 he got 104 seats. We also like you to be Chief Minister for this term. But there is no guarantee that you will complete the term. Can Yediyurappa give a stable government with these many “rebel” MLAs? I don’t think so,” he concluded.

I believe in the motto ‘forget and forgive’: Yediyurappa

Chief Minister B.S. Yediyurappa has moved the confidence motion in the Assembly. Facing an Assembly with a truncated strength, Yediyurappa moved a one-line motion that said the House expresses confidence in the Ministry headed by him.

“There is a severe drought in the State and rain deficiency in 86 taluks. The administration has broken down in the State. Even the Finance Bill was not passed due to the political crisis. I will work towards restoring administration. My priority will always be farmers and weavers,” he said.

R. Ramesh is also expected to move SC today against his disqualification from the Karnataka Assembly under the Xth Schedule. Other disqualified MLAs also to move once they get their respective orders.

BJP expected to have a smooth sailing in Karnataka trust vote

The Opposition is not expected to mount a serious challenge to the government on Monday, as many believe that “it is now only a numbers game in which the BJP has the upper hand.” However, the principal Opposition, Congress, seems to be mired in confusion. The party is yet to elect a leader who will be the Leader of the Opposition.

Congress Legislature Party (CLP) leader Siddaramaiah is expected to lead the party in the Assembly on Monday. Senior Congress leader Ghulam Nabi Azad is scheduled to reach the city on Monday to hold parleys and select the Leader of the Opposition.

What if BJP MLAs vote against Yediyurappa, asks Siddaramaiah

Mr. Siddaramaiah, who was in Mysuru for the third death anniversary of his son Rakesh, told presspersons that Mr. Yediyurappa does not enjoy a majority in the House.

“Only when a majority of the total number of members present in the House support him during the motion of confidence will he be able to secure a majority. What if the BJP MLAs themselves vote against him?” he asked.

Mr. Siddaramaiah, however, sought to downplay his own remark by claiming that he was not anticipating it.

I have behaved consistently: Speaker

Legislative Assembly Speaker K.R. Ramesh Kumar, who disqualified 14 Congress and Janata Dal (Secular) MLAs on Sunday, said he had been behaving consistently and in a specified manner over the last few days.

Defending his decision to disqualify the legislators, the Speaker said: “This cannot be drama. On Thursday night, when I disqualified three legislators, I promised to deliver order on the rest of them in a couple of days, which I have done now.”

The Congress Legislature Party will meet under the chairmanship of Siddaramaiah on Monday, ahead of the special session of the Assembly in which Chief Minister B.S. Yediyurappa is set to move the motion of confidence. The CLP meeting, in the Vidhana Soudha at 9 a.m., is not only expected to discuss strategies for the session but also the scenario post disqualification of 11 party rebels.

‘Our preparation is on par with facing a super cyclone like the one that hit the Odisha coast in 1999’, says NDRF chief Source: thehindu.com Related

Malkajgiri MP and TPCC working president A Revanth Reddy was remanded in judicial custody till March 18 by a local court in Rangareddy district on Thursday. He was one of the accused in a case registered at Narsingi police station of Cyberabad for allegedly taking aerial photographs of a farmhouse in Janwada by using a […]