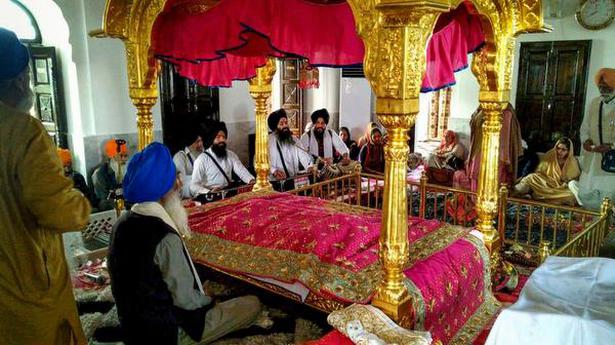 India and Pakistan continued to spar over procedural issues, hours before the inauguration of the Kartarpur corridor while Pakistan’s Foreign Minister in a last-minute gesture declared a waiver of entry fees for two days for the Indian pilgrims.

Speaking to a group of Indian media persons, Shah Mahmood Qureshi, the Foreign Minister of Pakistan explained that the $20 entry fees to be paid by every Indian pilgrim would be utilised in maintaining the infrastructure in and around the famed Gurdwara at Kartarpur.

“It’s a reasonable amount. This is not to generate a fund but to maintain the facility. There will be services provided and for that there will be some funds required,” Mr. Qureshi told reporters, while announcing that there will be no requirement for the entry fees on November 9 and 12. The festivities associated with the 550th birth anniversary of Guru Nanak who founded the Sikh faith will begin on Saturday when Indian pilgrims from across the border will reach the shrine using the religious corridor.Mr. Qureshi told reporters that India revoking the special status of Kashmir on August 5 was unfortunate. He said that the initiative of the Kartarpur Corridor was taken because it generated much goodwill in the Sikh community.He referred to the decision as the “annexation of Kashmir”.

He also targeted Indian Prime Minister Narendra Modi personally in an interview with journalist Barkha Dutt. “His bigotry and his narrow-mindedness has destroyed the Kartarpur spirit,” said Mr. Qureshi in the interview on Prime Minister Modi.

Both sides continued to exchange barbs over India sticking to the provisions of the October 24 agreement, which required the visitors to carry Indian passports and OCI (Overseas Citizen of India) cards. Pakistan’s Prime Minister Imran Khan had announced on November 1 that he was waiving the need for Sikh pilgrims to carry Indian passports while visiting Kartarpur. However, the official spokesperson of the Ministry of External Affairs said on Thursday that this offer was not part of Pakistan’s proposals incorporated in the agreement that cannot amended unilaterally by Mr. Khan.

India’s refusal to accept unexpected Pakistani generosity that was not part of the original agreement, further fomented the war of words with the Pakistan Foreign Office declaring that India declined the offer of “passport free” travel for the Sikh pilgrims and accused South Block of neglecting Sikh sentiments.

At least 21 people were killed and more than 50 others injured when a packed private luxury bus overturned in Banaskantha district of North Gujarat on Monday evening, said officials. The ghastly mishap took place at Trishulia Ghat, a hilly patch on the Ambaji-Danta road near Ambaji town of Banaskantha district, around 160 km from […]

Lok Sabha Speaker Om Birla on Monday cautioned TMC member Mahua Moitra for casting aspersions on the Chair and passing comments from her seat while the proceedings of the House were under way. “I am telling you that please don’t keep passing comments from your seat or else I will be forced to take action,” […]

The Supreme Court on Friday adjourned by two weeks a plea seeking to declare the Congress manifesto for the 2019 Lok Sabha elections “unfair and against Model Code of Conduct”. A Bench headed by Chief Justice S.A. Bobde deferred the hearing after it was apprised that one of the co-petitioners in the case has not […]