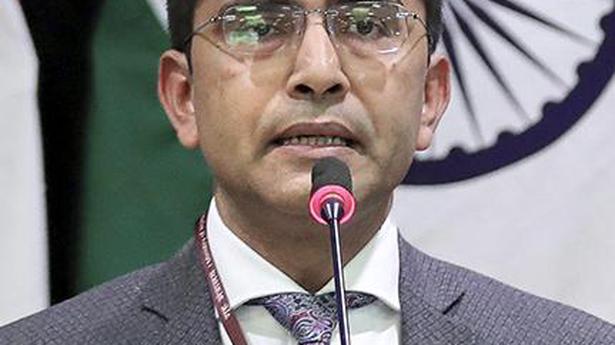 The U.S. congressional hearing on the human rights situation in Kashmir reflected a lack of understanding of Indian democracy and institutional safeguards, said an official of the Ministry of External Affairs (MEA) on Thursday. The Indian response came days after a hearing at a house foreign affairs subcommittee on Asia and Pacific described the situation in Kashmir as a “disaster” and “crisis.”

“These comments display a very limited understanding of India’s history, her pluralistic society, constitutionally guaranteed freedom, her fundamental rights for all citizens, and the robust institutions operating in the world’s largest democracy,” said Raveesh Kumar, MEA spokesperson, explaining that the hearing was “used” to undermine India’s recent steps in Kashmir.

“The government is responsible and responsive to the safety and welfare of Indian citizens,” he said.

The congressional hearing on human rights had submissions from different stakeholders on Kashmir and expressed serious concern about not letting accredited journalists belonging to American news outlets to travel to Kashmir.

However, Mr. Kumar took note of the fact that the Assistant Secretary of State for South and Central Asian Affairs Alice Wells had indicated support for India’s concerns regarding cross-border terrorism.

The official said India was regularly informing the U.S. interlocutors regarding the situation in Kashmir. “We have urged our interlocutors to bear in mind the aspect of cross-border terrorism. We take note of the statements made by Ambassador Alice Wells that Pakistan needs to do much more in curbing terrorism on its territory in a credible, verifiable and irreversible manner,” said Mr. Kumar.

He further stated that the treatment of minorities in Pakistan was indeed a matter of concern.

During the congressional hearing, Ms. Wells had explained the democratic context of India in Delhi’s recent decisions regarding Kashmir and said, “I recognise that the situation is complex. I recognise that Pakistan is not without a responsibility in some of its actions.”

The Supreme Court on Tuesday refused to set up a fact-finding committee to probe the police action and alleged brutalities committed against students of Jamia Millia Islamia (JMI) and Aligarh Muslim University protesting the Citizenship Amendment Act (CAA). A Bench led by Chief Justice of India (CJI) Sharad A. Bobde on Tuesday reasoned it would […]

Many places in south Tamil Nadu are likely to receive moderate rainfall till Friday under the influence of the weather system that lies over the Comorin area. Some places over the north Tamil Nadu too have chances of moderate rainfall till Friday, according to the Meteorological Department. On Tuesday, several weather stations across the State […]