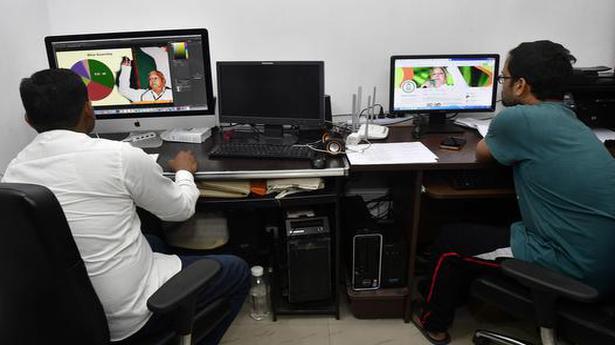 At first you don’t see anything out of the ordinary. You only feel the urgency in the air and hear the rhythmic click of the keyboard. A closer look reveals that Abhinav Pankaj, a core member of the Rashtriya Janata Dal’s (RJD) social media team, is working the keyboard with just a stump for a hand.

“After the accident, I started fiddling with the phone and computer keyboard first using my feet,” Mr. Pankaj said.

Mr. Pankaj, who has B.Tech in Chemical Engineering, joined the RJD team in 2013. Like Mr. Pankaj, the core members of the team are all young men from varied backgrounds, none of whom has a professional degree or experience in advertising or public relations.

“We do not have resources like the BJP to rope in advertising firms to design our campaign. We have a core team of five members who work from Patna and the RJD’s youth team across Bihar contributes,” said Sanjay Yadav, a close aide of RJD leader Tejashwi Yadav and mentor of the social media team.

With party patriarch Lalu Prasad Yadav in prison in Ranchi, the social media campaign in centred around his absence. It has released three campaign songs — “Jan Jan Main Lalu Hai”; an emotional appeal from Rabri Devi in Bhojpuri, overlaid with images of her sitting at Mr. Prasad’s feet in hospital; and a third about Mr. Tejashwi Yadav with the tag line “Yashavi, Tapasvi, Ojasvi hai Tejashwi”.

The core team doubles up as statisticians, researchers and strategists. They analyse voter percentages, caste equations, and the impact of independents in various constituencies.

The RJD leadership too is new to the social media with Tejashwi Yadav, now a prolific user of Twitter, having joined only in December 2013.

Mr. Prasad joined a month later in Janaury 2014, reluctantly but seduced by the possibility of a direct connect with supporters.

Given the RJD’s largely rural voter base, the team focusses on Whatsapp and Facebook. The party’s official Facebook page has 1.2 million followers.

They were part of group which arrived from Chennai on May 6. Source: thehindu.com Related

No justice for Athawale

Republican Party of India’s Ramdas Athawale is sulking as the BJP has kept no Lok Sabha seat for him in Maharashtra; the MoS for social justice and empowerment had been eyeing Mumbai South-Cen­tral. A prominent Dalit face in the state, he’ll be retai­ned in the upper house. In Good Health Shiv Sena leader Aditya Thackeray […]

TIRUMALA Sri Lankan Prime Minister (PM) Mahinda Rajapaksa today took part in the Astadala Padapadmaradhana seva – a weekly ritual observed only on Tuesday – inside the hill temple of Lord Venkateswara along with his son Yoshita Rajapaksa and other dignitaries. Ceremonial honours A team of TTD officials led by Executive officer (EO) Anil Kumar […]