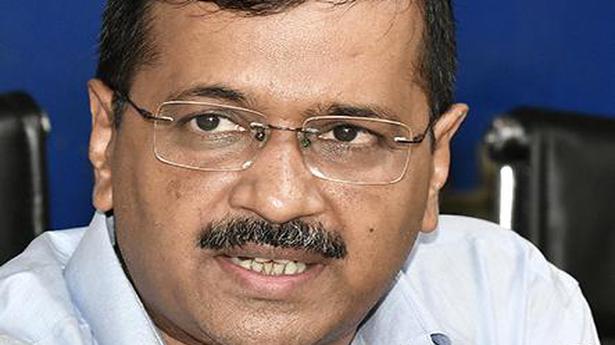 Delhi Chief Minister Arvind Kejriwal has directed the Transport department to send him the department’s views on the issue of exemptions to be granted for segments of vehicles during the odd-even period between November 4 and 15, the Delhi government said in a statement.

In September, Mr. Kejriwal had announced the implementation of the odd-even vehicle rationing scheme in anticipation of the smog Delhi faces each winter due to stubble burning in neighbouring states. The scheme was announced as part of a comprehensive, seven-point Parali and Winter Action Plan by the Chief Minister.

Under the scheme, the government mandates road rationing to permit use of vehicles with odd and even numbered registration plates on odd and even days of the week.

“As the Delhi government gears up to implement the Action Plan, the question of which segments of vehicle drivers should be exempt from the alternate day bar on odd and even number plate registered vehicles is being discussed at length,” the statement said.

“In light of the varied views on this matter among the public as well as the departments concerned, the chief minister has sought clarity from the Transport department well in advance. Mr. Kejriwal has asked the department to submit its views to him within the next 3 days,” the statement said further.

According to the statement, the most critical segment being discussed was that of women drivers. From the point of view of women’s safety, when the government had implemented the scheme in 2016, all vehicles that had only women passengers were exempt from the rule.

The rationale, the statement said, was that women in Delhi feel a sense of security in their own vehicles for travelling and should be permitted to take the safest mode of transport.

Additionally, all vehicles with women drivers and male school-going children wearing school uniforms were also exempt, in order to ensure mothers are free to ferry their children to and from school. The chief minister has directed the Transport department to consider the implementation of this exemption and share its views on repeating the same for this year’s odd-even, the statement said further.

In the previous edition of the scheme, all two-wheelers had been exempt from the alternate day bar on plying on the roads. “While this significantly helped manage traffic on the city’s public transportation system, some experts had expressed reservations against the exemption,” the government said.

“The government believed then that with the current capacity of the city’s buses and Metro rail, it was not possible to carry such a large number of people on the public transport network,” the government statement said.

The latest estimate for the number of two-wheelers that ply in Delhi is over 70 lakh. If two wheelers are not exempt, it will lead to over 35 lakh persons, other than lakhs of pillion riders, to switch to public transport every day.

“The Chief Minister has asked the department to review the current capacity of the public transport network and state its views on whether or not two wheelers should be exempt this year,” the statement added.

In the past, all CNG vehicles were also permitted to ply on roads on all days during the odd-even scheme based on the fact that CNG vehicle emissions are substantially less polluting than diesel or petrol vehicles.

“However, there were reports of large-scale misuse of this exemption in the previous editions of odd-even. The chief minister is concerned that the scheme may fail to achieve its purpose if people bypass the restrictions by using wrongfully procured CNG stickers to evade punishment,” the statement pointed out.

Mr. Kejriwal has asked the department to formulate a position on this matter after duly considering views of Indraprastha Gas Limited (IGL) and officials involved in the distribution of CNG stickers.

The department should, the chief minister said further, consider whether there is any foolproof way of identifying genuine CNG vehicles and in the absence of such a methodology, what are the views of the department on the exemption granted.

A call on the list of exempted vehicles among various categories, the statement added, will be taken by the government after the Transport department’s views are submitted.

Hundreds of people witnessed the annual abhisheka for the Nandi statue at Chamundi Hill on Sunday. Organised by the members of the Bettada Balaga Charitable Trust, this was the 14th edition of the event and brought the granite statue alive in different hues. As priests chanted sacred hymns and offered special prayers, various ingredients, including […]

Phone-tapping not a new charge: Madhwaraj

Pramod Madhwaraj, former Minister, said on Sunday that there was nothing new in the phone-tapping charges as the same had been made since the time late Ramakrishna Hegde was the Chief Minister of the State. Speaking to presspersons here, Mr. Madhwaraj said that it was possible that all CMs may have got phone-tapping done. It […]