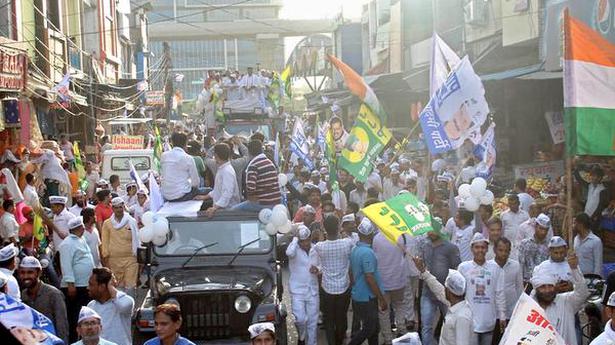 In an appeal to the electorate to vote for his candidate, Mr. Kejriwal said that AAP, along with alliance partner Jannayak Janta Party (JJP), was committed to put an end to the rule of criminals and ensure the security and safety of women in the State. Mr. Kejriwal said that corruption had reached its peak in Faridabad and successive governments had plundered the resources of the city.

Flanked by JJP leader Dushyant Chautala and Mr. Jaihind, the Delhi Chief Minister addressed the crowd from atop a mini-truck outfitted to look like a “rath”, with flags of the two parties tied to either side.

Accompanied by a large motorcade, the seven-hour-long roadshow started at the Delhi-Faridabad border around 3 p.m. The roadshow passed through five Assembly constituencies: Tigaon, Old Faridabad, Badkhal, NIT and Ballabgarh. AAP supporters could be seen standing on the roofs holding party flags, clicking pictures and waving at the senior leaders as the motorcade passed through several localities.

Addressing the crowd at several stops, Mr. Kejriwal accused the BJP and the Congress of creating division in society by pitting one caste against another.

Donning the trademark AAP cap, Mr. Kejriwal claimed that his party did not discriminate along caste lines and took everyone along. “We are offering opportunities and respect to all,” said Mr. Kejriwal.

He said that Faridabad topped Haryana in crime against women and had reported the maximum number of gang-rapes in the State.

Mr. Chautala said that sitting Faridabad MP Krishan Pal Gurjar had won the previous election calling the toll tax as discriminatory, but did not keep his promise to remove the toll plaza. He said that toll was charged on all the roads leading to Faridabad, adding that it was not possible to enter the city without paying the toll.

Making an appeal to the people to ensure victory for the joint AAP-JJP candidate with record votes, Mr. Chautala said that they had fielded a candidate who was the most educated among all in the fray.

Mr. Jaihind said that the law and order situation in the city could not be improved till the time transfers and postings in the police department were carried out at the behest of politicians.

The police in Odisha’s Malkangiri district celebrated the Women’s Day through a special ceremony that included the surrender of a female Maoist cadre from Chhattisgarh and honouring of 15 former women Maoists from the district, who had surrendered in the past. At the event, held at the district police headquarter on Sunday, Debe Sodi, 22, […]

Could join RCEP if demands are met, says Piyush Goyal

The decision to not join the Regional Comprehensive Economic Partnership (RCEP) is final for now, but if the other countries agree to India’s demands, then negotiations and talks are possible in the future, Commerce Minister Piyush Goyal said on Tuesday. Prime Minister Narendra Modi had on Monday announced that India would not be joining the […]