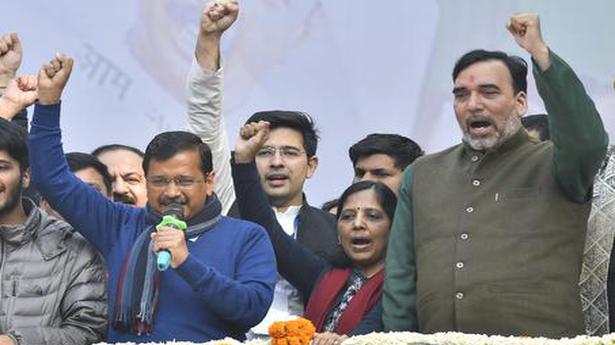 No Chief Minister or political leaders from other States will be part of the Aam Aadmi Party convener Arvind Kejriwal’s oath ceremony at Ramlila Maidan here on February 16, said senior party leader Gopal Rai on Thursday.

“No chief minister or political leader from other states will be invited for the ceremony that is going to be specific to Delhi,” he said.

Mr. Kejriwal will take oath with the people of Delhi who have reposed their faith in his leadership, he added.

The AAP returned to power winning 62 of the 70 assembly seats in the election held on February 8.

India wants to comply with global sanctions, including U.S. sanctions on Venezuela and Russia, but also needs to maintain its own strength and strategic interests, Finance Minister Nirmala Sitharaman said in an interview on Tuesday. The United States in January imposed the toughest sanctions yet on Venezuela’s oil industry. The move has scared away some […]

The Income Tax Department on Wednesday asserted before the Madras High Court that it was perfectly right in initiating action under the Prohibition of Benami Properties Transaction (PBPT) Act of 1988 to attach all immovable properties that were reportedly purchased by former Chief Minister Jayalalithaa’s close aide V.K. Sasikala using demonetised currency notes to the […]

Super 50: an initiative for tribal students to fulfil dreams

Maharashtra’s Tribal Development Department in association with the Pace Educational Trust on Tuesday launched an academic programme for young tribal students aspiring to be doctors and engineers. Inspired by the work of Patna’s Anand Kumar and his Super 30, which prepares smart but underprivileged students to sit for IIT entrance exams, the Super 50 programme […]