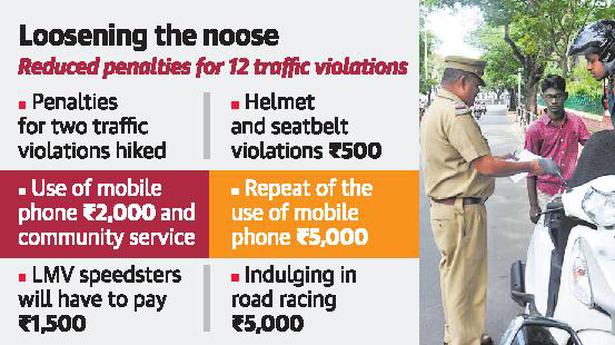 Ending a nine-week impasse, the Kerala Cabinet has decided to reduce penalties for 12 traffic offences, and enhance penalties for two violations, under the Motor Vehicles (Amended) Act 2019 that came into effect from September 1.

Bowing to opposition from motorists for the hefty increase in penalties, the Cabinet chaired by Chief Minister Pinarayi Vijayan on Wednesday decided to reduce the penalty for motorcyclists not wearing headgear from ₹1,000 to ₹500.

Those caught speeding will have to pay ₹1,500 instead of ₹1,000 to ₹2,000 for violating speed restrictions in the first instance while driving light motor vehicles, and ₹3,000 for medium and heavy vehicles instead of ₹2,000 to ₹4,000.

The State on Wednesday reported two more positive COVID-19 cases, one each in Guntur and Vijayawada, taking the total to 10 from seven districts, according to the health bulletin. A 52-year-old man from Guntur attended a religious meeting at a mosque at Nizamuddin in Delhi and spent two and a half days with about 20 […]

Director General of Police Jacob Thomas on Tuesday faced a bureaucratic hurdle that could stymie his bid to contest the Lok Sabha election from the Chalakudy constituency in Kerala. Mr. Thomas told The Hindu that the State government had doubted whether his application for voluntary retirement he had mailed to the General Administration Department (GAD) […]

One dies while cleaning water sump

Six persons, who entered a small water sump in Kasapuram village in Agali mandal, fell unconscious and one of them, K. Karianna, 46, died due to lack of oxygen on Sunday morning. Madakasira Circle Inspector K. Devanand said that an anganwadi worker Lakshamma was getting her house renovated and her son Ramesh entered the 7-feet […]