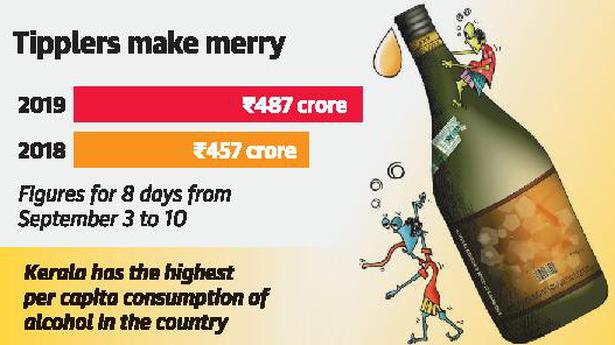 Kerala capped a season of indulgence by consuming nearly ₹500 crore worth of alcohol this Onam.

According to the Kerala State Beverages Corporation (Bevco), the State-owned liquor retail monopoly, the proceeds from the sale of liquor through its outlets in the past week alone has exceeded the 2018 figures by an estimated ₹30 crore.

The amount of liquor sold in bars and hotels remained unquantified. Bootleg liquor, hooch and moonshine also appropriated a sizeable segment of the market for cheap and hard spirits on holidays.

Kerala has the highest per capita consumption of alcohol in the country. The sale of liquor here has continued on an upward spiral despite the prohibitive tax on legal alcohol and the many dry days.

Bevco officials said the increase in sales was despite outlets remaining shut on Thiruvonam day. An Excise official said the closure of outlets on Thiruvonam had spawned hoarding of liquor, and illegal and covert sales. It also prompted bars to up their rates. Many violated their licence conditions by selling liquor as parcels.

The Kerala State Road Transport Corporation (KSRTC) on Tuesday filed an affidavit before the Kerala High Court seeking three more weeks to implement its directive to relieve 1,565 empanelled drivers who are working beyond 180 days. The court had directed the KSRTC to terminate the services of empanelled drivers before April 30 and fill the […]

1 killed, another injured in U.P. mob attack on child-lifting suspicion

A man was killed and another seriously injured by a mob in a village in Sambhal when it mistook the two for child-lifters on Tuesday. Raju and Ramavtar, from Chhabra village of Chandausi in Sambhal district, were taking their nephew Ravi for treatment on a motorbike to a hospital when a group of men in […]

Apart from U.S. President Donald Trump’s participation in ‘Howdy, Modi!’ diaspora event in Houston on September 22, it is understood that there will be an India-U.S. bilateral when both leaders are in New York City, on the sidelines of the United Nations General Assembly’s 74th session. Mr. Trump is due to address the General Assembly […]