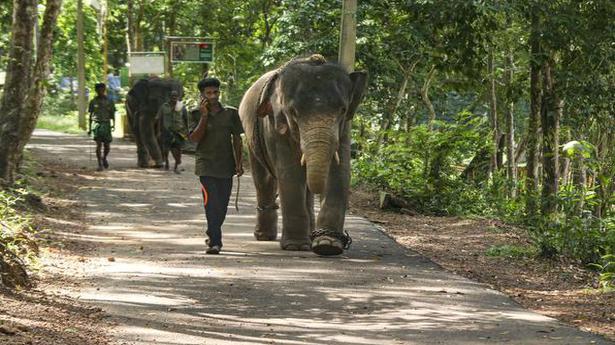 The Kerala government would set up a first-of-its-kind elephant rehabilitation centre at an outlay of ₹105 crore, to take care of elephants that were either orphaned or abandoned.

The rehabilitation centre would house an elephant museum, mahout training centre, a well-equipped veterinary hospital and crematorium for the elephants.

Former wildlife warden Shajikumar told PTI that the facility intends to take care of the orphaned or abandoned elephants.

“The centre can accommodate 50 elephants and a residential facility for 80 mahouts has been arranged. There will be administration blocks, tourist cafeteria spread over 56 hectares of land,” Mr. Shajikumar, who formerly headed the project, said.

Elaborating, he said the main objective was to ensure that elephants, which are orphaned or abandoned could be provided a facility for a better treatment.

“Basically rehabilitation involves sending the elephants back in to the wild. But these days it’s quite difficult to implement. If a wild elephant is caught in Wayanad, the locals may not agree to release it back there itself. In such cases, this Kottoor rehabilitation centre can take care of them,” he said.

The research scholar also said it was possible to offer specialised care to the elephants. According to records, there are 507 captive elephants in the State. Mr. Vijayakrishnan pointed out that being in a semi-wild set up is the major advantage of the facility. “The captive animals suffer a lot from stress, and stress in turn affects their digestive process, immune responses, reproductive systems and all. So this place will provide a natural habitat and reduce the stress and by this, we can give them effective care and cure for the animals,” he said.

A youth and a woman were arrested in Kollam in connection with the alleged sexual abuse of the latter’s granddaughter. The Yeroor police identified the youth as Ganeshan, 23, of Ezhamkulam. The victim, a minor girl, was residing with her 55-year-old grandmother after she had been briefly rehabilitated in a government children’s home following her […]

‘Don’t pack toys and food together’

The Food Safety and Standards Authority of India (FSSAI) has issued an advisory asking all States and Union Territories to discourage the practice of packing of toys/gifts with food products for infants and small children as there are chances of contamination and risk of accidental ingestion. It has become a common practice for manufacturers to […]