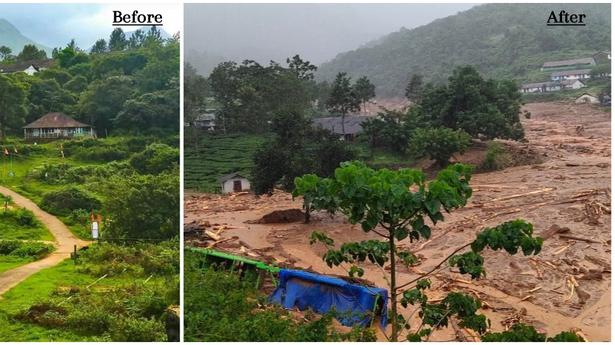 Some of the about 200 people who fled from the Puthumala landslip to the nearby forest office at Mundakkayam near Meppadi in Kerala’s Wayanad district has been evacuated by rescue workers even as four bodies have been recovered from the debris of the landslip that struck the hilly plantation area on Thursday afternoon.

The district recorded 250-300 mm rainfall over the past day.

At least six people have so far been killed in the landslips at Muttil and Puthumala, authorities said.

Reports say around 80 members of the National Disaster Response Force and Defence Security Corps have arrived at Puthumala. Roads and bridges leading to the area have been washed off and access is extremely difficult. Rescue workers had to walk up to 3 km in slushy uphill terrain to reach the forest range office at Mundakkayam.

Authorities and local residents feel that more bodies could be found under the mounds of rocks and soil that gushed down on Thursday, taking along a section of the Vellarimala hill along. Since the plantation estate employed several migrant workers, mainly from Assam, those missing could include some of them too, the locals said. Many houses of plantation workers’ quarters (called ‘paadi’), a temple, a mosque and an estate canteen were washed away in the landslip.

Inaccessibility by road is the biggest challenge faced by the rescue workers and the marooned people.

Those who have been evacuated told authorities and mediapersons that the area had witnessed a series of minor landslips since Wednesday, but the one on Thursday afternoon proved to be massive and deadly.

Meanwhile officials have reported an “unimaginably high” rainfall of 550 mm in the Puthumala area in Wayanad district.

The rainfall of 550 mm over the past day was recorded by the rain-gauge station set up by the Irrigation Department near Puthumala. Across the Wayanad district the rainfall was 250 mm to 300 mm.

An estimated 17,000 people affected by rain-related incidents have been relocated to 126 makeshift relief camps across Wayanad district, the authorities said.

(With inputs from Kalpetta)

COVID-19: Rising up to the ‘challenges’ during lockdown in Kerala

With stay-at-home orders in place amid the COVID-19 lockdown, it’s no wonder many are turning to social media to beat lockdown blues. And while some are getting thumbs-ups on social media posts by showcasing their creative skills, others are taking on trending challenges to keep themselves busy. #Dalgonacoffee, #buttabomma, #handemoji… Muskaan Shiju, a class five […]

Mumbai civil and sessions court gives anticipatory bail to two others who are in quarantine Source: thehindu.com Related

Regretting that some people are spreading false news on social media that consuming chicken and watermelon causes coronavirus, Minister for Agriculture B.C. Patil has said that this false information has resulted in a huge loss to the poultry industry and watermelon farmers of the State. “False and unsubstantiated information have badly impacted the poultry farmers. […]