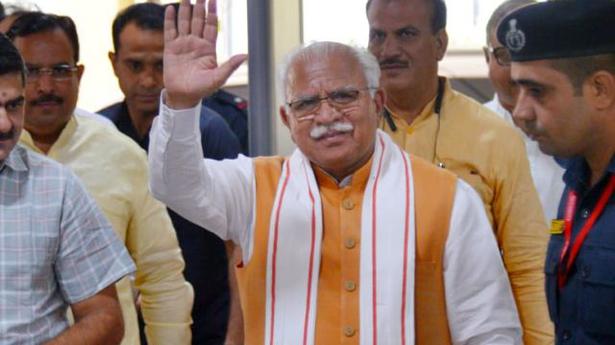 Amid a hung Assembly in Haryana, the ruling BJP, which has emerged as the single largest party with 40 seats, is making all-out efforts to form the next government in the State.

Haryana Chief Minister Manohar Lal Khattar on Friday left for New Delhi from Chandigarh to meet the party’s central leadership to discuss the permutations and combinations of forming the government.

The BJP has ended six seats short of the majority mark needed to form the next government in Haryana, and therefore has set its eyes on roping in seven Independent MLAs, besides Gopal Kanda of the Haryana Lokhit Party and Indian National Lok Dal legislator Abhay Chautala to cross the majority mark of 46 in the 90-member House.

Party sources said that Manohar Lal Khattar is likely to be elected as the leader of BJP’s state legislature and he could stake claim to form the government by evening on October 25.

On Thursday, the BJP parliamentary board authorised party president Amit Shah to take all decisions regarding government formation in Haryana. Prime Minister Narendra Modi and Mr. Shah, besides other senior party leaders, attended the board’s meeting.

Meanwhile, Congress leader and former MP Deepender Hooda said that all Opposition parties should join hands to form the next government. “The Independents who join the Khattar goververnment will be betraying the mandate,” he said.

Mr. Hooda said that the Jannayak Janta Party should, without wasting any more time, join hands with the Congress.

The Tadepalli police on November 4 seized about ten tonnes of suspected beef being smuggled in a container van from Odisha to Chennai. The vehicle’s driver and cleaner were taken into custody. Police alerted veterinary department officials to ascertain whether the seized meat was beef or of any wild animal. Samples have been sent to […]