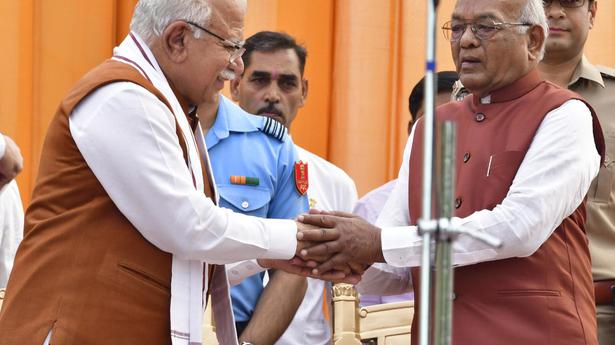 Manohar Lal Khattar took oath as Haryana chief minister for the second time on October 27 and will lead the BJP-JJP coalition government in the state.

Haryana Governor Satyadeo Narain Arya administered oath at a ceremony held at the Raj Bhawan in Chandigarh on Diwali day.

Jannayak Janta Party leader Dushyant Chautala’s father Ajay Chautala, who stepped out of the Tihar jail on October 26 on a furlough, also attended the event.

Dushyant Chautala’s mother Naina Chautala, who has been re-elected MLA for the second time, was also present.

Ajay Chautala is lodged in the Tihar jail in Delhi after his conviction in a teachers’ recruitment scam.

The BJP had on October 25 sealed a deal with the JJP to form the next government in Haryana after the saffron party fell short of six seats from the majority mark.

In the 90-member assembly, a minimum strength of 46 MLAs is required to form the government.

BSP president and former Uttar Pradesh Chief Minister Mayawati on Friday praised the Hyderabad Police for its strong action against the accused in the gang rape and murder of a 25-year-old veterinarian and asked the UP Police to take inspiration from them. “The action that has been taken by the Hyderabad Police is praiseworthy,” Ms. […]

The ambassador of South Korea on Wednesday said that he had asked officials in Seoul to try the Electronic Voting Machines in conducting polling in his country. Speaking at a seminar here, Ambassador Shin Bongkil expressed confidence in the political process of India and said the election process helps India’s diverse democracy to survive and […]

Will make all efforts to implement SC order on VVPAT, says EC

The Election Commission on Monday said it would make all efforts to immediately operationalise and implement the Supreme Court directive on cross-checking results of five EVMs per Assembly segment with VVPAT slips. While the Opposition had demanded cross-checking of 50% EVM results, the Commission had opposed it citing an expert committee report. After hearing both […]