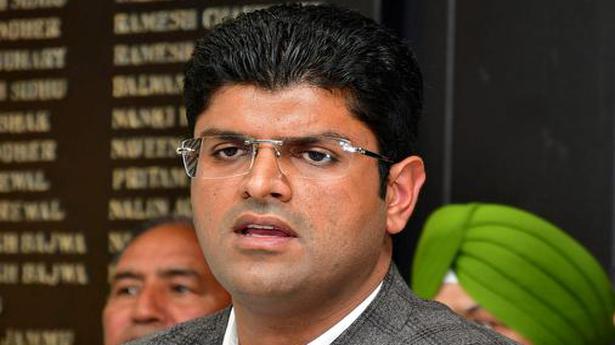 Jannayak Janta Party (JJP) leader Dushyant Chautala, who has emerged as kingmaker in Haryana, will be meeting his 10 legislators in Delhi on Friday to decide which party to support in order to form the next government in the state, sources said on Thursday.

The Haryana Assembly poll verdict threw up a fractured mandate with the Congress winning 31 of the 90 seats at stake and the BJP bagging 40 seats. The half-way mark is 46.

Though Mr. Chautala has remained non-committal on whether his party would support the BJP or the Congress, party sources said that he is likely to meet Union Home Minister and BJP chief Amit Shah soon.

Sources also said that the BJP too would like to have him onboard and make him an equal stakeholder in the state government as it would help reduce dependence on Independents, even though many of them are BJP rebels.

The BJP was weighing its options, sources in the saffron party said.

The Bharatiya Janata Party, which formed its first ever government in the state on its own in 2014, needs support this time to come to retain power.

In this scenario, role of both Independents and JJP is crucial.

With 31 seats, the Congress will need the support of the JJP as well as seven Independents to come to power which looks like an uphill task.

Earlier in the day, Mr .Chautala while commenting on the trends which were available at that time had said, “This shows there was huge anti-incumbency against the (Manohar Lal) Khattar government.”

But when asked whether his party will support the BJP or the Congress, Chautala remained non-committal.

“It is too early to say anything. We will first summon a meeting of our MLAs, decide who would be our leader in the House and then take it further,” he told reporters.

Notably, Mr. Chautala had floated the JJP in December last year after a vertical split in the Indian National Lok Dal (INLD) following a feud in the Chautala clan.

The INLD was decimated in the polls and could manage to win only one seat.

Prime Minister Narendra Modi and West Bengal Chief Minister Mamata Banerjee will hold a meeting at the Raj Bhavan on Saturday evening, a state secretariat official confirmed on Friday. According to the highly-placed official, the meeting between the two leaders will be held here soon after the Prime Minister arrives in the city on Saturday […]

The Bharatiya Janata Party on Sunday fielded four of its sitting MPs from Delhi for the Lok Sabha election scheduled for May 12. Union Minister Harsh Vardhan, Delhi BJP chief and one of the party’s star campaigners Manoj Tiwari, Pravesh Verma and Ramesh Bidhuri have been fielded from the Chandni Chowk, North-East, West and South […]

Another Pakistan drone recovered near Indo-Pak border in Amritsar: Police

The Punjab Police on Friday recovered a Pakistani drone, a second such seizure within three days, which was used to airdrop arms and ammunition at a border village in the State, police said. Earlier, the police had recovered a half-burnt unmanned vehicle from Tarn Taran on Tuesday which they had said was also used to […]