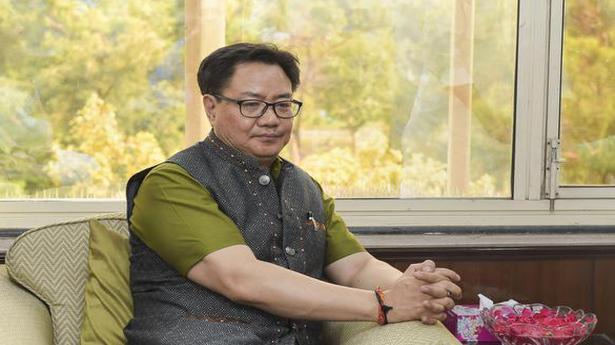 The Centre is working on an adventure policy to promote certain destinations as well as activities that make adrenaline surge.

India had never had such a policy that could impact sports as well as tourism, Union Sports and Youth Affairs Minister Kiren Rijiju said during the launch of a Thailand airline’s flight between Guwahati and Bangkok.

“I have asked officials in my Ministry to draft an adventure policy besides revamping the youth and sports policies. The Northeast will become the focal point in the entire approach,” he said on Sunday.

Mr. Rijiju said adventure destinations in the Himalayan and sub-Himalayan swathes of the Northeast could benefit from the policy, provided the region was promoted as a combined package and not in isolation by the constituent States.

“All State governments in the Northeast must come together for unified tourism policy. Otherwise, the region’s culture and natural assets would remain a potential without being exploited sustainably,” Mr. Rijiju said at the programme to mark the launch of Nok Air’s inaugural flight.

Assam Chief Minister Sarbananda Sonowal flagged off the flight — the first by any foreign airline to and from Guwahati — from the Lokapriya Gopinath Bordoloi International Airport early on Sunday.

Mr. Rijiju also warned that the region had to first get out of the culture of shutdowns and blockades to cash in on tourism. Years of insurgency had already had a debilitating effect on the Northeast, he said.

Bathukamma sarees orders this week only

In order to avoid last-minute rush and delay in distribution of Bathukamma sarees to beneficiaries, the State government has decided to place orders for weaving them well in advance this week only. This time, the State government decided to distribute 1.05 crore sarees to the beneficiaries measuring around seven crore metres of length of cloth […]

Centre has no plans to privatise Railways: Goyal

The government does not plan to privatise the Railways, but will outsource the commercial and on-board services of a few trains to improve service delivery, Railway Minister Piyush Goyal informed Parliament. Answering a question whether the government had planned to privatise railway operations in phases, including platform maintenance, he said, “No, sir. There is no […]

Mr. Singh is in the custody of Howrah Police since his arrest Source: thehindu.com Related