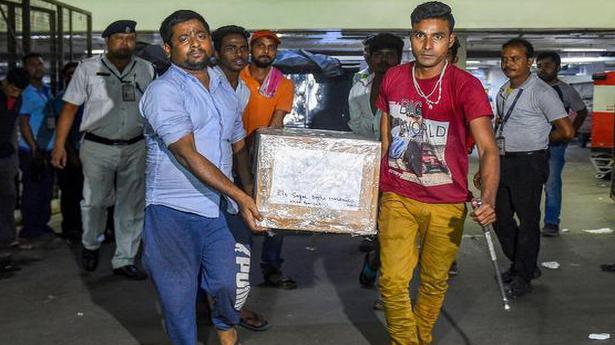 The bodies of five labourers, killed in a terror attack in Kashmir, have arrived at their hometown here in Murshidabad district on Thursday morning, accompanied by grief-stricken family members, State Ministers and Trinamool Congress leaders among others.

Hundreds of people from far-flung areas have flocked to Bahal Nagar village to express condolences and attend the last rites of the slain labourers, scheduled to be performed later in the day.

The five labourers were shot dead by terrorists in Kulgam district of Kashmir on Tuesday. One labourer, also from Murshidabad, sustained severe injuries in the attack and was currently undergoing treatment at a Kolkata hospital.

State Urban Development Minister Firhad Hakim, who was at the Kolkata Airport on Wednesday night to receive the remains of the labourers, lashed out at the BJP-led central government over the security situation in Kashmir, seeking to the know the purpose of abrogating Article 370, in the wake of the recent terror attacks.

He also questioned the “silence” of Union Home Minister Amit Shah on the incident.

“The citizens of this country are being killed and Union Home Minister Amit Shah is silent. What is the use of abolishing Article 370 in the valley when so many people are getting killed? It means the terror activities have not stopped in the valley,” he told reporters.

The Kolkata Mayor, who accompanied the family members from the airport to Murshidabad, will attend the last rites, along with other senior TMC leaders, including party MP Mohua Moitra and State Transport Minister Suvendu Adhikari.

In an apparent reference to Prime Minister Narendra Modi’s “56-inch chest” speech, Mr. Hakim said, “What was the point of having 56-inch or 72-inch chest if the Union government can’t protect its citizens?”

Earlier in the day, West Bengal Chief Minister Mamata Banerjee had demanded a thorough inquiry into the incident.

Maintaining that the Centre was responsible for the law and order situation in the Valley, she said, “In Kashmir, there are no political activities and there is no political party there currently. The entire administration belongs to the central government, the Army and the other central forces… they are taking care of it.

And on that day a delegation of European Union parliamentarians was visiting the state. Inspite of all this, how could they abduct these poor innocent fellows … I’m really shocked.”

Ms. Banerjee had on Wednesday announced a compensation of ₹ lakh for the families of the five labourers.

The State government needs to recruit 1,125 more village and ward secretariat employees in Anantapur district by issuing fresh notification, even as it prepares to launch 383 citizen services through these secretariats from January 1 by replacing Mee Seva services. Grama Swarajya While Mee Seva centres used to serve 5,000 population, each of the Village […]

₹105 crore allocated for bridge across the Krishna

The State government has, in principle, allocated ₹105 crore for the construction of a bridge across the Krishna river channel near the confluence point of the river with the Bay of Bengal, connecting the five islands in the Krishna Estuary to the mainland in Diviseema. The nearly 500-metre-long bridge will be constructed between Etimoga on […]

School teacher Sanju Choudhry moved her family from Jaipur to Gurugram a decade ago in search of a job. In the run-up to the Lok Sabha election in the city on May 12, parties have been vying to seek credit for development in Gurugram. Ms. Choudhry, however, believes that the city has miserably failed to […]