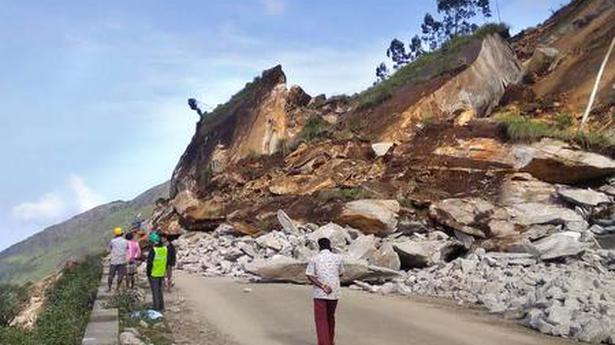 The earth caved in and huge rocks tumbled down at the site of the road-widening works on the Kochi-Dhanushkodi National Highway at Gap Road near Munnar on Sunday, blocking traffic on the stretch.

Sources said the landslip occurred around 4 a.m. from a hill, a portion of which was taken for the widening work. The rocks fell from a height of nearly 150 feet, a few of them on the vehicles parked below. No casualties were reported. The road was strewn with mud and rocks for nearly 400 metres. Vehicles parked in the site and three shops by the road were damaged. A bison, too, fell down along with the debris, and officials were trying to rescue the animal, sources said.

Devikulam Sub Collector Renuraj visited the spot and directed the National Highway (NH) officials to remove the rocks and earth from the road, and restore traffic.

However, an NH official said at least two weeks would be required to remove the debris as the rocks had to be blasted. Till then, traffic would be blocked on the stretch. In December 2018, landslips on Gap Road had resulted in traffic disruption for a week.

In the floods of August 2018, the NH in Munnar had witnessed many landslips. It was alleged that authorities had failed to take adequate measures to prevent landslips while conducting the earth work on the loose soil in the hill areas.

The construction of the 42-km Munnar-Poopara-Bodymettu stretch began last year and is the main route by which visitors reach Munnar.

Nritya Gopal Das and Champat Rai Bansal, chairman and general secretary of the trust set up to oversee construction of the Ram temple in Ayodhya, are both accused in the Babri Masjid demolition case. Both Mr. Das and Mr. Bansal were on the dais from where several leaders had addressed ‘kar sevaks’ before the mosque […]

The Indian Air Force has focussed on air defence preparedness in the eastern and north-eastern sector with an eye on the country’s ‘eastern neighbour’. On Wednesday night and Thursday morning, the IAF carried out a drill of its Sukhoi Su-30 jets from the civilian airport on the outskirts of Guwahati. It was the first-of-its-kind operation, […]