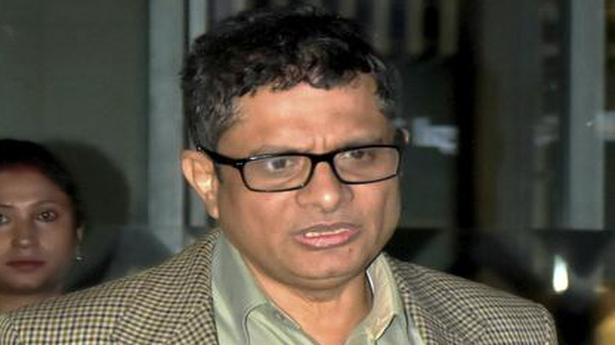 Former Kolkata Police Commissioner Rajeev Kumar has claimed that the allegations raised against him in connection with the multi-core Saradha chit fund scam is part of a “larger conspiracy” by two prominent Bharatiya Janata Party (BJP) leaders Mukul Roy and Kailash Vijayvargiya.

Mr. Kumar said this in his response filed in the Supreme Court against a Central Bureau of Investigation (CBI) plea for his arrest. Mr. Kumar was a part of the West Bengal Police Special Investigation Team (SIT) that initially probed the scam before it was transferred to the CBI on the apex court’s orders.

He said the “sudden inexplicable turn” by the CBI; the pointing of finger at the State SIT probe; and finally, the targeting of him, is “borne out of a larger conspiracy between Mukul Roy and Kailash Vijayvargiya of the BJP ruling in the Centre”.

Mr. Kumar mentioned in the affidavit that there was an audio clip of BJP leaders speaking of targeting a “few senior police officers” of the State.

He claimed that he had been bearing the brunt of defamatory statements made against him by Mr. Vijayvargiya. He said the allegations against him were not sourced from the probe of any investigation agency or from the courts, but from the utterances of a politician in a public gathering. This has raised doubts on the veracity and motive of the allegations, which has both “aggrieved and shocked” him.

Mr. Kumar said that he has already moved a Kolkata court against the “defamatory imputations” of Mr. Vijayvargiya.

The affidavit is in response to an opportunity given by the apex court to Mr. Kumar to file a response on the CBI plea to arrest him.

The CBI had urged a Bench led by the Chief Justice of India Ranjan Gogoi to lift its order of a stay passed on February 8 against any “coercive action” against Mr. Kumar.

The agency had said his arrest was necessary to “unravel the entire gamut of the larger conspiracy in the ponzi scam cases.”

On March 23, the apex court had indicated that it cannot be expected to close its eyes if “some very, very serious matters” come to light. The court’s observation had come after perusing the CBI’s status report on the examination of Mr. Kumar in Shillong, in connection with the multi-crore ponzi scam cases.

What began as a contempt petition against the Chief Secretary of West Bengal, the Director General of Police (DGP), and Mr. Kumar, for allegedly manhandling a CBI team on February 3, has now snowballed into the CBI levelling allegations that Mr. Kumar, as the functional head of the West Bengal government-appointed SIT, actively connived with the high-profile accused in the ponzi scam case to tamper crucial call data records (CDRs).

Collectors, superintendents of police (SP) and candidates contesting elections in the Maoist-prone districts were alerted by Odisha Director-General of Police (DGP) B.K. Sharma in the wake of the Maoist landmine blast in Dantewada district in adjoining Chhattisgarh on Tuesday that killed five persons including a BJP MLA. Polling will be held on April 11 in […]

A day after protesting outside Sonia Gandhi’s residence here over alleged irregularities in ticket distribution, former Haryana Congress chief Ashok Tanwar on Thursday resigned from all election committees of the party but said he would continue to work as an ordinary party worker. In his letter to Congress president Gandhi, Mr. Tanwar said he was […]

Contrary to claims that Andhra Pradesh is at the forefront in the implementation of the Mahatma Gandhi National Rural Employment Guarantee Act (MGNREGA), there are wide gaps defeating the purpose of the Centrally-sponsored programme. A team of social entrepreneurs from different organisations is on a State-wide tour to understand the issues of NREGA workers. “At […]