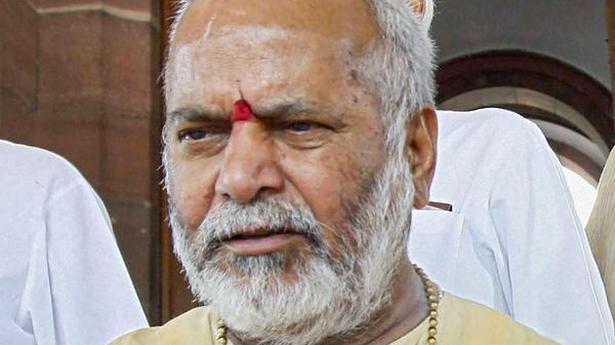 After being denied relief by the Allahabad High Court, the Shahjahanpur law student who has accused former Union Minister Swami Chinmayanand of rape was on September 24 allegedly detained for questioning in an extortion case alleged by him.

While there is no confirmation yet on her status from police, footage from Shahjahanpur showed police personnel escorting the law student into a jeep parked outside a local court. The law student has approached the court seeking anticipatory bail against her arrest, after the Allahabad High Court declined to grant her relief.

The local court, after hearing both sides, has reserved the order till 4 p.m. The police could take her into custody if the order goes against her.

The law student had earlier approached the HC seeking protection against her arrest and also prayed that she be allowed to record a fresh statement under Section 164 of CrPC.

However, a Division Bench of Justices Manoj Misra and Manju Rani Chauhan said the court had no jurisdiction to entertain a petition or an application for stay of arrest of the accused or the victim in the case, and asked her to move an appropriate application in an appropriate court.

“…the matter has been placed before us only to monitor the investigation,” the court said.

The Special Investigation Team probing the case last week charged the law student with involvement in the extortion case filed by Mr. Chinmayanand. Along with her three male friends, the law student was booked for extortion, disappearance of evidence and criminal intimidation, among other sections.

The student featured as the fourth name among the accused in the case — she was listed as “Miss A”— in a single-page press release issued by the SIT.

Three persons, allegedly directly associated with her, were arrested on charges of sending extortion messages to Mr. Chinmayanand demanding ₹5 crore from him. They were identified as Sanjay Singh, Sachin Sengar and Vikram alias Durgesh. The police said all three had confessed to making the extortion calls.

Naveen Arora, SIT chief, said they had “prima facie” found the “involvement” of the law student in the extortion case. While observing that investigation in the matter was still on, the senior officer said further action would be taken after the recovery of the mobile phones of the law student and her friend Sanjay Singh, who is the key accused in the extortion case, and other footage.

A 45-year-old woman was injured in overnight shelling and firing by Pakistani army along the Line of Control (LoC) and the International Border (IB) in Poonch and Kathua districts of Jammu and Kashmir, officials said on Sunday. Saleema Bi, a resident of Lanjout village, was hit by splinters when a mortar shell exploded near her […]