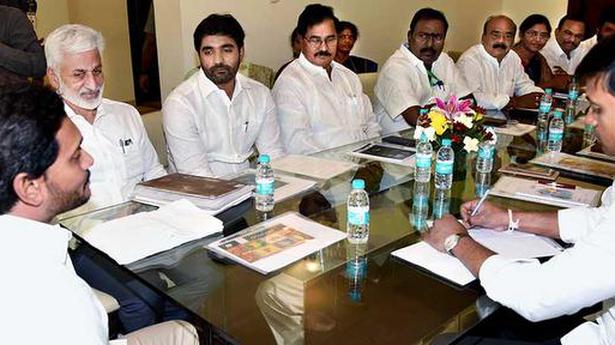 Chief Minister Y.S. Jagan Mohan Reddy said on Saturday that no alternative to the Special Category Status (SCS) was acceptable to the people of Andhra Pradesh, and that the MPs of the State should put in all their efforts to achieve it.

Mr. Jagan Mohan Reddy told the MPs that they should see the post as a big responsibility. The voters elected 22 party candidates to represent them in Parliament for the express purpose of fighting for SCS, he added.

Mr. Jagan Mohan Reddy said that the 24 MPs (22 Lok Sabha members and two Rajya Sabha members) would soon be formed into groups and allotted different departments to focus on. He also told them to work as a team with discipline and bring a good name to the State in Parliament.

Asking the MPs to closely follow issues related to the State, Mr. Jagan Mohan Reddy told them to meet the Union Ministers concerned at every opportunity and prevail upon them for SCS.

He asked the MPs to be thorough with all the promises made to the State in the A.P. Reorganisation Act, 2014, and fight for them at every available opportunity.

The Chief Minister said he was going to speak about Andhra Pradesh’s need for SCS at the NITI Aayog Governing Council meeting that would be attended by the Chief Ministers of all the States and presided by Prime Minister Narendra Modi.

He also advised the MPs to take the guidance of seniors such as V. Vijaya Sai Reddy and P.V. Midhun Reddy. Some of the MPs used the opportunity to discuss problems in their respective constituencies. While suggesting solutions, Mr. Reddy took notes during the discussions.

Leave merits of a case for trial, says Supreme Court

A tendency among government agencies to hand over documents in sealed covers to courts in “every case” coupled with an inclination among judges to verbatim reproduce their contents as judicial findings to deny bail is against the right of an accused to a fair trial, the Supreme Court held in its Chidambaram judgment on Wednesday. […]

Chief Justice of India (CJI) Sharad A. Bobde on Wednesday orally expressed the Supreme Court’s keenness to have Union Transport Minister Nitin Gadkari attend a hearing and explain his plans to induct vehicles running on electricity, and usage of clean fuels such as hydrogen. However, Additional Solicitor General A.N.S. Nadkarni said a Minister’s presence in […]