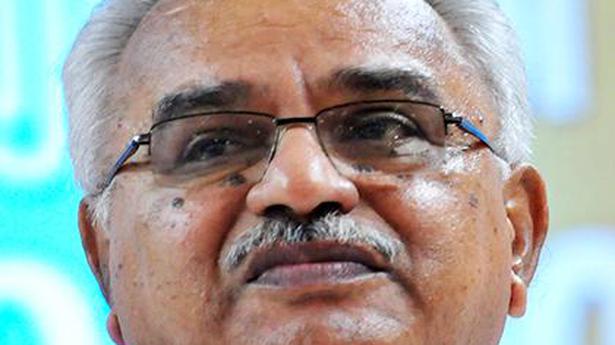 The hype and speculation over the entry of Congress president Rahul Gandhi in the Wayanad Lok Sabha segment has put the Congress in a quandary.

Is there any impropriety in Prime Minister Narendra Modi addressing the nation just before the notification of the election?

Yes. Once the model poll code is in force, parties can dwell only on their manifesto and the government discharges only routine responsibilities. This address smacks of impropriety. The Election Commission should be more assertive. Deference of the announcement of poll dates to suit Mr. Modi’s convenience shows its lack of grit.

Is the nominal Left presence in Parliament a matter of concern?

Indeed. But now we are set to augment it in Parliament and also mobilise masses outside on issues that deeply concern the people. We are bound to have a robust presence hereafter. The thin dividing line between the Congress and the BJP on economic policies and the soft Hindutva being pursued by the former and similar issues have made us a natural secular, credible choice for the people. The emergence of regional parties with zero national outlook and skewed priorities has enhanced the significance of Left parties.

What will be the role of the Left post-election?

There will be a renewed thrust on mass mobilisation. Rest of the issues would be discussed in due course. We were instrumental in forming a common minimum programme for the United Progressive Alliance I, but we refused to join the government since the dispensation did not give us the leeway to function at will.

When Sabarimala and Ayodhya occupy the campaign centre stage. what alternative does the Left offer?

The Congress and the BJP are attempting to mesmerise the people into a fictitious world invoking their faith and religion. We lay accent on real life issues such as poverty, unemployment, and agrarian crisis to stir them up to the reality. The local body byelection result post-Sabarimala in which the BJP drew a blank is a pointer to the public sentiment.

Their decision to disband a taluk union for according reception to an LDF candidate is a pointer to their policy.

Does the LDF foresee a Congress-BJP nexus?

It is there always, but it would not affect the LDF anyway. The BJP has been trading its votes with the UDF all along. They started voting on their symbol only after they came to power at the Centre.

A constable of the National Investigation Agency (NIA) and a casual staff were arrested for allegedly stealing fake Indian currency notes with a face value of ₹1.5 crore from the agency’s high security strongroom at its headquarters on Lodhi road in South Delhi. The case is shrouded in mystery on how the suspects gained entry […]

A 19-year-old woman was allegedly raped and an iron rod was inserted in her private parts by a man in the Pardi area here, police said on January 27. The gruesome incident took place on January 21 and the accused, Yogilal Rahangdale (52), was arrested from Gondia district, they said. The accused was working as […]

A study carried out in the Western Ghats shows that deforestation has led to the loss of 6,761 sq km of elephant habitat over 40 years leading to increase in human-elephant conflict. The study area spanned over 47,000 sq km across Karnataka, Tamil Nadu and Kerala, and included Bhadra Tiger Reserve in the northern most […]