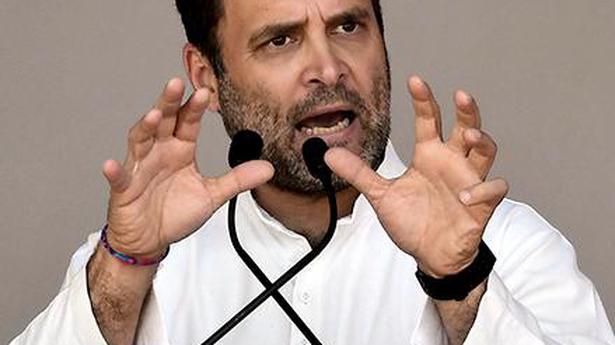 Talks for an electoral understanding between the Left parties and the Congress in West Bengal have hit a stalemate over the two Lok Sabha seats of Raiganj and Murshidabad in north Bengal.

The West Bengal unit of the Congress met party president Rahul Gandhi on Wednesday and conveyed its opposition to the proposal to not contest the two seats. Both seats were won by the CPI(M) in the 2014 general election and the central committee of the party had on Monday proposed that there should be “no mutual contest” on the two seats, along with four others in Murshidabad and Malda districts that the Congress had won in 2014.

According to sources, the Congress has, however, not taken a final call on the issue and the decision will be taken by its central leadership. CPI(M) general secretary Sitaram Yechury is expected to meet Mr. Gandhi over the issue.

“The West Bengal Pradesh Congress Committee is not willing to give up either Raiganj or Murshidabad Lok Sabha seats. This would go against the sentiments of Congress workers,” State Congress president Somendra Nath Mitra told The Hindu.

Hours after the CPI(M)’s proposal on Monday, the State Congress in a statement had said “certain geographies have been historically Congress bastions and we find it difficult to ignore our supporters in such constituencies”.

Mr. Mitra made it clear that the term “certain geographies” was meant for Raiganj and Murshidabad.

The Raiganj seat was traditionally with an old Gandhi family loyalist, the late Priya Ranjan Dasmunsi. His wife and then Raiganj MP (2009-2014) Deepa Dasmunsi contested the seat in 2014. The Congress is reluctant to leave the seat this time for CPI(M) MP Mohammed Salim, who had defeated Ms. Dasmunshi in a close contest by a little over 1,600 votes. The other CPI(M) seat, Murshidabad, was bagged by Badaruddoza Khan who defeated the Congress candidate by around 18,000 votes.

The other issue the State Congress unit has is that it is in favour of a long-term understanding with the Left parties. Many in the Left camp, however, view it as “a pressure strategy”.

“The ball is in their court. Our State leadership will take a call if the Congress remains adamant on their stand. The no-mutual-contest was a proposal from our side. If they reject it, we shall fight on all the four seats Congress currently holds,” a senior CPI(M)leader said, adding there is no scope of negotiation on the two seats.

“It is their decision. If they do not want an alliance, then the Left Front will decide. In election we have a Plan A, Plan B and Plan C,” said Mr. Salim, the sitting MP from Raiganj and a CPI(M) Polit Bureau member.

In September 2018 when election strategist Prashant Kishor had officially joined Janata Dal (United), party president and Bihar Chief Minister Nitish Kumar had said, “he is the future” but, Mr Kishor’s recent remarks has landed him in a soup with his position in the JD(U) in a jeopardy. During an interview in private news channel, […]

The Centre for Advanced Research in Environmental Radioactivity (CARER) at Mangalore University has established a facility for Carbon-14 dating of arc Source: thehindu.com Related