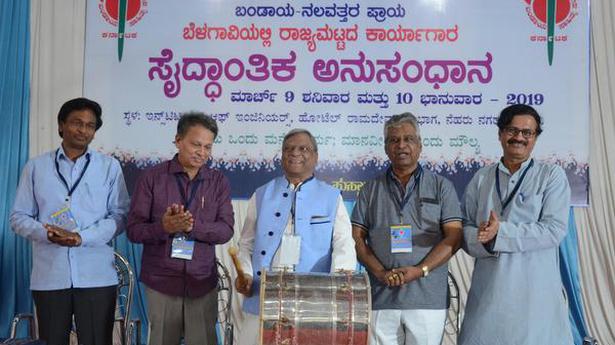 A real writer is an activist. If he does not consider himself as a person fighting for social change, he is not a writer. He is just an entertainer, Marathi writer Sharan Kumar Limbale said in Belagavi on Saturday.

A real writer writes about the pains and problems of the poor, downtrodden, Dalit, Adivasi and women. The entertainer-writer, on the other hand, writes about gardens, flowers, stars and beautiful faces. It is not difficult for the discerning reader to find out which kind of literature will lead to the strengthening of Indian society, he said.

At the 40th anniversary celebrations of the Banadaya Sahitya Sanghatane, Dr. Limbale who is credited with starting the trend of Dalit autobiographies with his (Akkara Mashi), said that Dalit writers and those who espoused the cause of the downtrodden had proven that literary activism was a powerful tool to change society. Dalit writers in Maharashtra, Bandaya writers in Karnataka and Leftist and progressive streams across the country challenged the established ideas of literature.

“For centuries, Dalit writers were not accepted in mainstream literature. We were pushed out. But the liberal and progressive organisations provided us a platform for writing and publishing. Slowly, we created our own identity. We gained such recognition that we were able to tell them that we were the real mainstream. If they wrote for the five per cent, we wrote for the 90 per cent,” he said. “We wrote for the common man. We stood for democracy and the upheld the principles of liberty, fraternity, equality and justice. Thus, we filled an important vacuum in the literary world,” he added.

“It is wrong to say that a Dalit writes only for Dalits. He writes to create awareness among the general public, of the problems of the deprived classes. I always say that while Prime Minister Narendra Modi wants to clean the streets through the Swachch Bharat Abhiyan, Dalit writers are trying to clean society’s brain and heart. The pace of change in society has not kept pace with the change in technological trends. We have learnt to land on the Moon and circle Mars. But we don’t allow the untouchable to drink water from the village well nor allow the women to enter the Sabarimala temple. This is something we need to introspect on,” Dr. Limbale said.

Writer and translator Sarjoo Katkar recalled that Dr. Limbale pioneered the genre of Dalit autobiographies in the country. His autobiography Akkara Mashi, (Eleven tolas of Gold), shocked the entire literary world with its realistic depiction of Dalit life. Among his interesting works is a book of aesthetics of Dalit literature, as he felt that existing aesthetics would not serve the purpose. Of his 44 works, 12 have been translated into Kannada, Mr Katkar said.

KPCC to take over financial liability of deceased building contractor

In a move to thwart the plan by the Communist Party of India (Marxist) plan to cause discomfiture to the district Congress over the alleged suicide of building contractor Joseph Muthuparakunnel at Cherupuzha, here, the Kerala Pradesh Congress Committee (KPCC) has announced that the party will take over the financial liability of the deceased for […]

The International Court of Justice will deliver on July 17 its verdict in a case relating to Indian national Kulbhushan Jadhav, whose death sentence by a Pakistani military court based on an “extracted confession” has been questioned by India. Jadhav, 49, a retired Indian Navy officer, was sentenced to death by the Pakistan military court […]