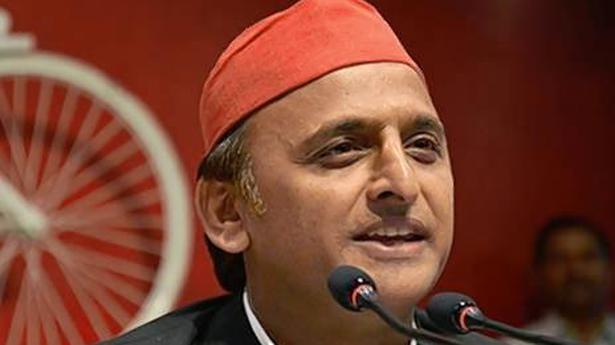 Attacking Prime Minister Narendra Modi for claiming that 40 TMC MLAs were in touch with him, Samajwadi Party president Akhilesh Yadav on Tuesday said the prime minister should be “banned for 72 years” for his “shameful” speech.

“Vikas (development) is asking… Did you hear the shameful speech of Pradhanji (PM)? After losing the faith of 125 crore countrymen, he (Modi) is now relying on the unethical assurance of defection allegedly given by the 40 MLAs,” he tweeted.

“This reflects his (Modi) black money mentality. He should be banned for not 72 hours but for 72 years,” he said.

While scores of tribals from Palghar, one of the parched districts in Maharashtra, were busy casting their votes, over 50 women and children were struggling to fetch water from a dry well, which was filled with a water tanker at Kundacha Pada village near Jawahar town on Monday.

“I will not vote. What is the use of voting when it can’t even fetch a bucket full of clean water to my house,” asked Gadri Janu Doba, a woman, while drawing water from the well to fill the plastic bottles she had carried.

Explosives will bring down Jain Coral Cove, which had the maximum number of housing units among the four illegal Maradu apartments, in the morning on January 12. The blast has been scheduled at 11 a.m. The prohibitory orders that were clamped in the area will continue for the day. The demolition will be a less […]

Rough seas battered coastal areas in the district on Wednesday even as the India Meteorological Department (IMD) and Indian National Centre for Ocean Information Services (INCOIS) warned that high swells are likely to lash the Kerala coast till Thursday night. Nearshore sea will be rough till 11.30 p.m. on Thursday due to the effect of […]