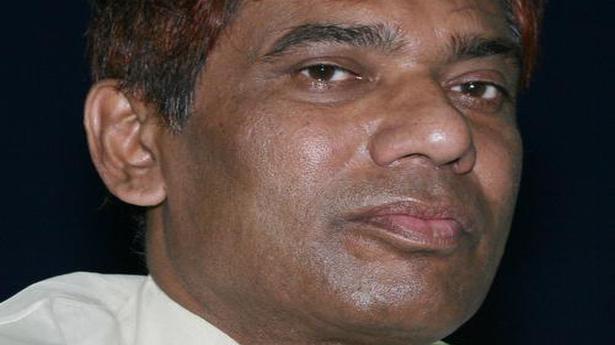 He was admitted to the hospital last week after suffering a heart attack.

The body will be kept at his residence in New Delhi and on Monday, at the LJP office in Patna for paying last respects. He will be cremated in the Bihar capital on Monday evening.

He is survived by his wife, two sons and a daughter.

“The body will then be taken to Patna, where it will be kept at Lok Janshakti Party’s office there from 11 a.m. to 3 p.m. for paying the last respects. He will be cremated at 4 p.m. in Patna,” he said.

Ram Chandra Paswan was a four-time MP and was first elected in 1999.

In May 2019, he was elected to the Lower House of Parliament from Samastipur in Bihar for the fourth time on a LJP ticket.

“Sad to hear of the passing of Shri Ram Chandra Paswan, MP (LS) from Samastipur, Bihar. He remained committed to serving those at the grassroots and contributed much to the well being of the people of Bihar. Condolences to his family, constituents and colleagues,” President Kovind tweeted.

Mr. Modi said Ram Chandra Paswan worked tirelessly for the poor and downtrodden and spoke about rights of farmers and the youth.

“Shri Ram Chandra Paswan Ji worked tirelessly for the poor and downtrodden. At every forum he spoke unequivocally for the rights of farmers and youngsters. His social service efforts were noteworthy. Pained by his demise. Condolences to his family and supporters. Om Shanti,” the PM tweeted.

The Lok Sabha speaker too offered condolences to the bereaved family members. “I am sad to learn about the untimely demise of Lok Janshakti Party’s Lok Sabha MP Ram Chandra Paswan ji. I pray to God to grant his soul a place in his feet,” he tweeted.

“Anguished to learn about the passing of Shri Ram Chandra Paswan ji, MP from Samastipur, Bihar. He will always be remembered for his efforts to empower the poor and marginalised. My deepest condolences with the Paswan family and his supporters in this hour of grief,” Home Minister Amit Shah said.

Haryana Chief Minister Manohar Lal Khattar on Saturday said that officials at the district level across the State had been directed to make arrangements for medical, stay and food facilities for migrant labourers. He gave the directions at a crisis coordination committee meeting with the senior government officers through video conferencing. “..officers have been directed […]

The Parliamentary Panel on Information and Technology has directed social media platforms — Facebook, WhatsApp and Instagram — to ensure that their platforms are not used to incite violence or meddle in the upcoming general election. This is the panel’s third meeting with social media platforms. The last meeting was with Twitter officials. “We asked […]