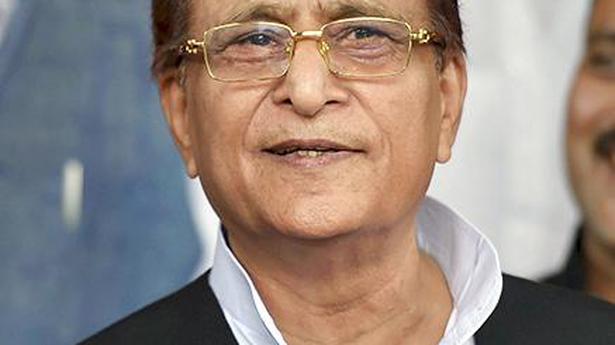 Lok Sabha Speaker Om Birla on Friday said Samajwadi Party member Azam Khan should apologise to BJP member Rama Devi or he would face action for his sexist remarks against her on Thursday when she was presiding over the House proceedings.

The Speaker had told the House that he would call a meeting of MPs from all parties to decide on the future course of action.

The matter was first raised, during Zero Hour, by Minister Smriti Irani. She said the remarks made by Mr. Khan during the debate on the Triple Talaq Bill was a “blot” on all legislators, including men.

“This is a blot on all legislators, including men. We cannot remain silent spectators to it. We have to speak in one voice that this is unacceptable,” Ms Irani said.

Supporting Ms Irani, Law Minister Ravi Shankar Prasad said either Mr. Khan should tender an apology or he should be suspended from the House.

Mr. Chowdhury said action should be taken against anyone demeaning women. He also raised the issue of members using objectionable words against UPA chairperson Sonia Gandhi in the past. This, however, drew protests from the members of the treasury benches, who said the issue should not be politicised.

A day after the peaceful protest in the Aligarh Muslim University against the Citizenship Amendment Act, an uneasy calm prevailed on the campus. The central university is enveloped in three layers of police barricading. Inside, students are either taking exams or are discussing the possible fallout of the act and the proposed NRC across the […]

Five friends, whose daring act saved a woman from being abducted in December last year in Tiruvallur district, were among those who were awarded the Anna Medal for Gallantry, 2020, on the Republic Day in Chennai. As one of the five friends died after being hit by an autorickshaw in which the accused escaped, his […]

The Kerala High Court on Thursday directed the magistrate court concerned to furnish details of the proceedings relating to the judicial remand of financial fraud accused Rajkumar who died while in police custody. The court passed the directive on a bail petition filed by K.A. Sabu, suspended sub-inspector of Nedumkandam police station and an accused […]