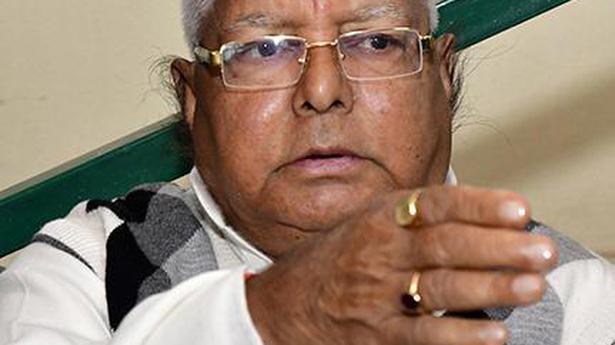 The recent Supreme Court decision denying bail to the imprisoned Rashtriya Janata Dal (RJD) president Lalu Prasad has dealt a setback to the former Chief Minister and his party, which would be facing a Lok Sabha election for the first time without its star campaigner and master at measuring the electoral pulse of the State.

With Prasad currently admitted in a government hospital in Ranchi for medical attention, RJD leaders said his absence was being felt. While his younger son and heir apparent Tejashwi Yadav has been spearheading the party’s campaign, there are three seats out of Bihar’s 40 where the party supremo is said to have a lot at stake.

The first of these is Patliputra, where his eldest daughter Misa Bharti is pitted against BJP candidate and Union Minister Ram Kripal Yadav. A one-time ‘man Friday’ to Prasad, Mr. Yadav had joined the BJP after he was a denied a ticket by the RJD in 2014 and gone on to defeat Ms. Bharti by over 40,000 votes. Ms. Bharti, who was subsequently elected to the Rajya Sabha, will now once again face off with her father’s former aide. Prasad’s elder son Tej Pratap Yadav, who is said to be close to Ms. Bharti, has started campaigning in the constituency to ensure his ‘Misa Didi’ wins. Mr. Yadav, who has built his popularity through his social connections and interactions, has also been campaigning for the last several days. With Prasad said to be determined to avoid a repeat of 2014, the father is said to be leaving no stone unturned to ensure his daughter’s win. Patliputra will go to polls in the seventh phase, on May 19.

Similarly, Prasad’s former pocket borough Saran — a seat he won four times — has become a prestige battle. The RJD has fielded Chandrika Rai, father-in-law of his elder son Tej Pratap Yadav. While Mr. Yadav, who got estranged with his wife Aishwarya Rai six months after their marriage in 2018 and has filed for divorce, voiced his opposition to Mr. Rai’s candidature and briefly even threatened to contest against him, a miffed Prasad stuck by his choice. The party’s MLA from Parsa, Mr. Rai is the son of former Bihar chief minister Daroga Prasad Rai and their family too is a respectable name in the area. He is pitted against the BJP’s Rajiv Pratap Rudy in this Yadav- and Rajput-dominated constituency. In 2014, Mr. Rudy had defeated Prasad’s wife Rabri Devi by more than 40,000 votes. Saran votes in the fifth phase on May 6.

The third seat where Prasad has a lot at stake is Madhepura, from where his friend-turned-foe-turned-friend again Sharad Yadav is pitted against Dinesh Chandra Yadav of the (JD-U) and sitting MP Rajesh Ranjan alias Pappu Yadav. Earlier, all three Lalu Prasad, Sharad Yadav and Pappu Yadav had represented this Yadav-dominated constituency commonly described as “Rome Pope ka, Madhepura Gope (Yadav) ka” (if Rome is associated with the Pope, Madhepura belongs to the Gope). In 2014, Pappu Yadav had contested on an RJD ticket and defeated the then NDA candidate Sharad Yadav. Subsequently expelled by the RJD for his ‘anti-party’ activities Pappu Yadav formed the Jan Adhikar Party (JAP). When Nitish Kumar “betrayed” the RJD to join hands again with the BJP in July 2017, Sharad Yadav refused to toe Mr. Kumar’s line and went on to found the Loktantrik Janata Dal. An ally of the Congress-RJD alliance, he however couldn’t wrangle a seat of his own for the party and had to settle with contesting from Madhepura on an RJD ticket. Now, Prasad wants Sharad Yadav to win the Madhepura seat to protect his reputation and political prestige. Pappu Yadav, who tried hard to contest from Madhepura on a Congress ticket but found his plans scotched by stiff opposition from Prasad and his younger son Tejashwi Yadav, finally threw his hat into the poll ring as a JAP candidate. Madhepura goes to the polls in the third phase on April 23.

The Communist Party of India (Marxist) will contest one Lok Sabha and five Assembly seats in Odisha. Announcing the list, CPI(M) secretary Ali Kishore Patnaik said veteran party leader Janardan Pati has been selected as party’s candidate for the prestigious Bhubaneswar Lok Sabha seat for which the Congress has already extended its support. Sitting MLA […]

The suspense over Congress MLA and former Home Minister P. Sabita Reddy joining TRS was broken on Wednesday after her nearly two-hour meeting with Chief Minister K. Chandrasekhar Rao at his camp office. After the meeting, Ms. Reddy’s son Karthik Reddy who was among the three siblings to accompany their mother told the media that […]