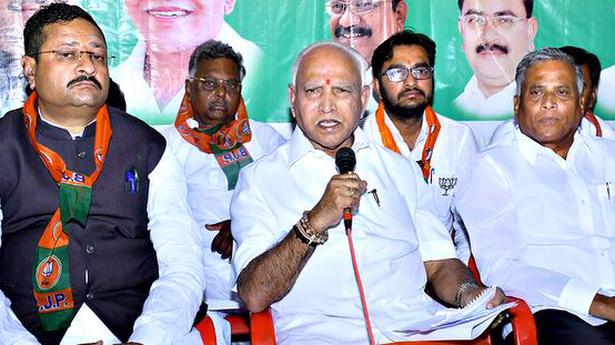 Once again hinting at efforts to install the Bharatiya Janata Party (BJP) government in the State after the announcement of Lok Sabha election results on May 23, BJP State unit president B.S. Yeddyurappa said that his party would register a landslide victory nationwide in the Lok Sabha elections and these results would impact the political atmosphere in the State.

He was speaking to mediapersons at Chandapur village in Chincholi taluk, Kalaburagi district, on Monday. His visit was part of his election campaign in favour of the party candidate Avinash Jadhav in Chincholi Assembly segment where bypolls are scheduled for May 19.

“The BJP would register an impressive win in the Lok Sabha elections. Many national leaders of Congress, including M. Mallikarjun Kharge, Veerappa Moily and K.H. Muniyappa, would bite the dust. After the landslide victory for the BJP across the country, the coalition government in the State would have to face the heat,” he said and exuded the confidence that his party candidate in Kalaburagi Lok Sabha constituency Umesh Jadhav would emerge the winner.

In an attempt to impress voters in the Chincholi Assembly segment, the former Chief Minister assured that his party would, upon coming to power, make all efforts to restart the Chincholi Sugar Factory, which was closed a decade ago.

“Besides, we would sanction adequate funds for the development of villages in the newly declared Kalagi taluk in the district,” he said.

“As many as 174 taluks are facing severe drought in the State and the government has failed to address drought-related issues,” he said.

At least 12 people were killed in rain and thunderstorm, accompanied by lightning, that lashed several parts of Bihar on Sunday. Nine people died and Source: thehindu.com Related

Wayanad district, a biodiversity hotspot on the Nilgiri biosphere reserve, is paying the price for reckless development. Hills in many parts of the district have been grotesquely wounded by quarrying. Deforestation and reckless commercial interventions have destabilised the environment. When rain of extreme intensity pours down, the precarious hills inevitably succumb, causing casualties and destruction. […]

Amid speculations that Maharashtra’s Leader of Opposition Radhakrishna Vikhe Patil may resign from his post after his son Sujay Vikhe Patil joined the BJP, the senior Congress leader told The Hindu on Wednesday that such reports were not true. In a clarification to The Hindu, Mr. Radhakrishan Vikhe Patil denied that no such decision had […]