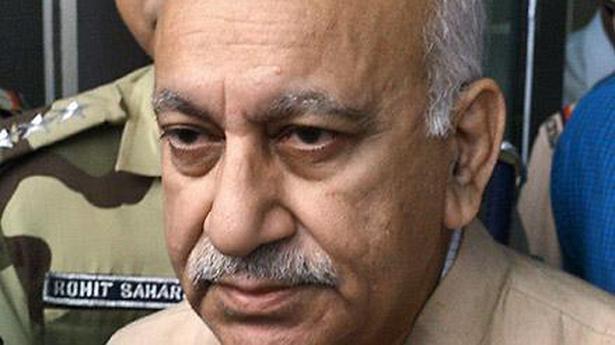 M.J. Akbar, former Union Minister and senior journalist, on Saturday reiterated his stand that the allegations levelled against him by senior journalist Priya Ramani had lowered his reputation in his family and among friends and colleagues.

In his earlier statement recorded during his pre-charge evidence he had stated this.

On Saturday, after he recorded his evidence, Mr. Akbar was cross-examined by counsel for the accused in the criminal defamation case filed by him against Ms. Ramani.

“Following the allegations made in a tweet by the accused, I resigned from the Cabinet and moved the court for justice,” he said.

Earlier, recounting his journalistic career, his entry into public life, joining the BJP and his induction into the Union Cabinet, he said the defamatory allegations had damaged his standing in society.

Mr. Akbar’s cross-examination saw many interruptions by his counsel. He wanted it conducted in a question-answer format. This was denied by Additional Chief Metropolitan Magistrate Samar Vishal.

When counsel for both parties began heated exchanges, Mr. Vishal observed that they should let the accused defend herself unhindered as it was a criminal defamation case in which, if convicted, she would have to spend two years in jail.

The cross-examination remained inconclusive. It will be taken up again on May 20.

Six dead, 18 injured as bus plunges into river near Raisen

Six persons, including two women and a five-year-old child, drowned and 18 others were injured when a Chhatarpur-bound private bus fell into a river in spate near Raisen in Madhya Pradesh in the early hours of Thursday. “Witnesses said as the private coach bus was speeding, it broke through the railing of a bridge and […]

After having rankled the BJP with his continuous outbursts against the CAA and the NRC, JD(U) national vice president Prashant Kishor has contended that his party, being the senior partner in the NDA in Bihar, should contest more seats than the BJP in the assembly election next year. The two parties had contested equal number […]