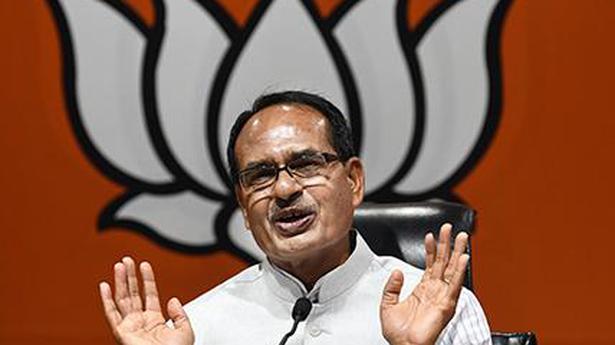 The BJP organised protests in several districts of the State on Saturday to mark what it claimed was over “100 days of corruption” by the Kamal Nath government, which was sworn in on December 17 last year.

“Youth are being cheated. Nobody is getting employment. Development has come to a standstill. Only one industry is flourishing in M.P. [after the Congress took over] and that is the transfer industry,” Mr. Chouhan said at one such party protest here.

“These [transfers] are not taking place without the greasing of palms. Everything is on sale here,” the BJP vice-president alleged.

At several protest sites, the BJP workers carried placards that read “₹281 crore corruption in 100 days, a record in development”. The figure is a reference to the recent Income-Tax searches on the premises of people close to Mr. Nath, including his former Officer on Special Duty.

The Department had on April 8 said that it had detected a “widespread and well-organised” racket of collection of unaccounted cash of about ₹281 crore during raids on houses of close aides of Mr. Nath and others.

The 29 Lok Sabha seats in Madhya Pradesh will go to polls in four phases beginning April 29.

The Chennai city police have formed four special teams to nab the offenders who stole ₹1.70 crore from a businessman in Nandanam during the early hours of Monday. The police, having recovered ₹1.56 crore, are combing the CCTV footage to ascertain the route the suspects took to enter and exit the locality. A senior police […]

Commemorating the 87th Indian Air Force Day, air warriors pledged to dedicate their lives to the nation at the 11 (A) Air Squadron (Tech) of National Cadet Corps (NCC) Tirupati group headquarters here. Group Captain R.M. Jha, who is the commanding officer, administered the oath of allegiance to the air warriors. The day was observed […]

PM inquired about circumstances that led to killing of rape accused

Prime Minister Narendra Modi had inquired about the killing by the police of the four accused in the rape and murder of a veterinarian near Hyderabad on November 27, at a meeting with the Telangana police chief a few days ago. Mr. Modi asked the Telangana DGP M.Mahendar Reddy about the fallout of the shooting […]