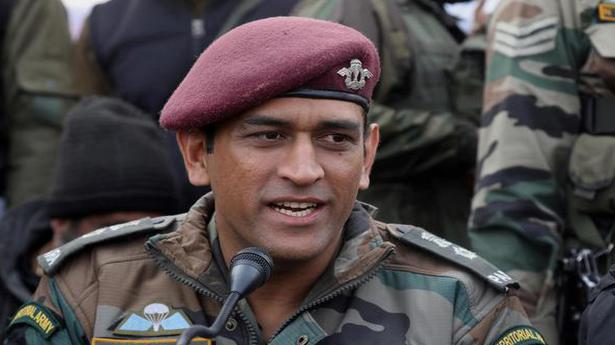 Cricketer M.S. Dhoni, who is an honorary Lieutenant Colonel in the Indian Army, will spend a fortnight with his unit in Kashmir, the Army said on Thursday.

“Lt. Col. (Honorary) M.S. Dhoni is proceeding to 106 TA Battalion (Para) for being with the Battalion from July 31 to August 15, 2019,” Army sources said on Thursday. The unit is currently in the Kashmir Valley as part of Victor Force.

Army sources said that as requested by Mr. Dhoni and approved by the Army headquarters, “he will be taking on the duties of patrolling, guard and, post duty, would be staying with troops.”

Last week, Mr. Dhoni made himself unavailable for the Indian cricket team’s tour of West Indies and instead decided to spend some time with the Army.

A research scholar of history has stumbled upon two Chola-period sluice pillars with inscriptions during a field study in Thimmayampatti in Pudukottai district M. Paramasivam, the research student of the Department of History at Arignar Anna Government Arts College, Musiri, while exploring the area, found two inscribed stone pillars and informed his guide R. Akila, […]

CITU seeks ban on layoffs, writes to PM Modi about retrenchments in media

The Centre of Indian Trade Unions (CITU) on Wednesday sought a ban on termination of jobs and cuts in wages during the lockdown and wrote to Prime Minister Narendra Modi about the recent layoffs in the media. CITU general secretary Tapan Sen wrote that while the Prime Minister had repeatedly appealed to employers not to […]